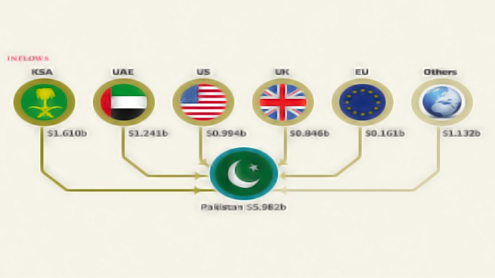 Remittances received from Norway, Switzerland, Australia, Canada, Japan and other countries during the fifth month of current fiscal year (FY13) amounted to $78.57 million as against $70.32 million received in the same month of last fiscal year (FY12).

The continued growth in workers’ remittances is the result of the efforts made by Pakistan Remittance Initiative (PRI) in collaboration with other stakeholders to facilitate both Overseas Pakistanis and their families back home. Since its inception, PRI has taken a number of steps to enhance the flow of remittances through formal channels which include: preparation of national strategies on remittances, taking all necessary steps to implement the overall strategy, playing the advisory role for financial sector in terms of preparing a business case, relationship building with overseas correspondents, creating separate efficient remittance payment highways and becoming a national focal point for overseas Pakistanis through round the clock. – Nation