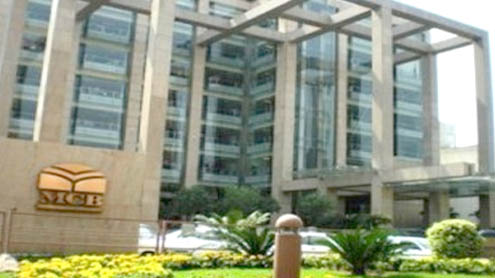 KARACHI: The Board of Directors of Muslim Commercial Bank (MCB) Ltd declared final cash dividend of Rs 3 and 10% bonus shares, in addition to interim cash dividends of Rs 10 already paid for the year ended December 31, 2012, a statement of the bank said on Thursday.

The quality of asset saw considerable improvement as the non-performing loans of the bank reduced by 4% to Rs. 25.562 billion reflecting improvement in infection ratio as at December 31, 2012. The deposit base of the bank grew by 11% closing at Rs 545.061 billion with an 18% increase in saving deposits, 13% increase in current deposits and 12% decrease in fixed deposits. CASA base, as a result has further strengthened to 85% compared to 81% last year.

Given the Bank’s strong financial footing and market base, MCB Bank Limited long term rating has been upgraded to AAA from AA+ previously in a notification by The Pakistan Credit Rating Agency on February 4, 2013.The Bank is already on the highest slot for its short term rating of A1+ on PACRA’s entity rating scale. The Board of Directors met under the chairmanship of Mr. Mian Mohammad Mansha, on February 7, 2013 to review the performance of the Bank and approve the financial statements for the year ended December 31, 2012. For the year 2012, the Bank reported profit before tax of Rs. 32.054 billion and profit after tax of Rs. 20.941 billion with an increase of 2% and 8%, respectively. Net markup income of the Bank was reported at Rs. 40.856 billion whereas non-markup income came to Rs. 9.153 billion.

Non-markup income registered an increase of Rs. 1 billion (13%) owing to 16% increase in fee, commission and brokerage income and 19% increase in dividend income during the year. The administrative block of the Bank registered an increase of 10% over 2011, which considering the inflationary pattern followed during the year, falls within the acceptable levels. The management has been successful in implementing central authorization levels and posting, ensuring control over expense growth. The provision charge of the Bank decreased significantly by Rs. 3.176 billion, primarily on the back of strengthened risk management framework. – PT