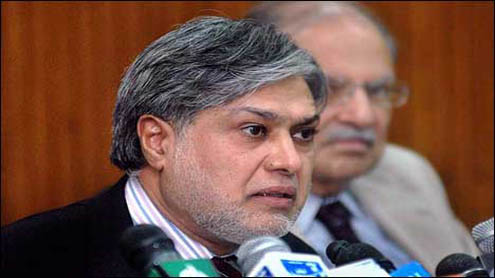 Federal Finance Minister Senator Ishaq Dar on Sunday presided over a high level meeting at the State Bank of Pakistan (SBP) here to review the progress on measures taken to increase remittances to the country.

The meeting was attended by SBP Governor Yaseen Anwar, chief  executives of private banks and senior officials of Ministry of Finance, said a statement issued here. The Finance Minister directed the SBP to release a sum of Rs 5 billion to private banks in lieu of remittance charges due to them. This amount, the Finance Minister said, would be reimbursed  by the  Ministry of Finance by Monday  positively.

Ishaq Dar expressed  satisfaction over the increase in remittances  by Pakistanis working abroad. He said that the Pakistan Remittance Initiative (PRI) should redouble its efforts so that the remittances exceed the target set by the government. The Finance Minister expressed the confidence that with the release of  Rs 5 billion to private banks, they would be able to continue providing  free of charge services to Pakistanis for sending money to their loved ones at home. The Government of Pakistan, he said, would continue to bear service charges involved in transfer of money by Pakistanis working abroad.

This would also ensure that they transmit their money through banking channel which helps in increasing the foreign exchange reserves of the country. The Finance Minister also directed the SBP Governor to come up with  new products to increase remittances and their prompt and reliable transfer to Pakistan. -App