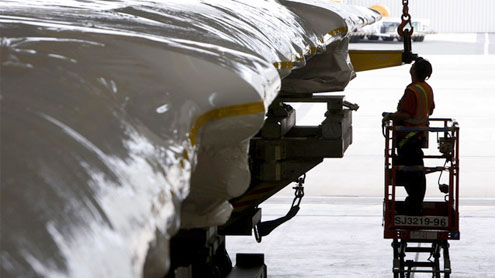 SYDNEY: Airbus will pay to repair wing cracks in A380 superjumbos, but compensation is unlikely to extend to other costs such as the time the aircraft were out of service, reports said Friday.

Qantas and other airlines found tiny cracks, which the carriers say pose no risk to safety, on the wings of several A380s earlier this year and the Australian carrier is in talks with Airbus on compensation.The European planemaker is expected to pay some 105 million euros (US$139 million) to repair the miniscule cracks worldwide as part of its warranty programme but would not pay other costs, The Sydney Morning Herald said.

“It is not typical that there would be any compensation above and beyond the actual repairing of the product,” Airbus chief operating officer John Leahy told the paper from the firm’s base inToulouse,France.”We are traditionally responsible for fixing the warranty issues.”(But) it’s just like a new car. If your car has to go in for a week to have some work done under warranty, the manufacturer pays for the warranty. The manufacturer doesn’t pay for you to go and rent another car.”

Airbus, the main subsidiary of aerospace giant EADS, said the hairline cracks were found on some wing rib-skin attachments on a limited number of double-decker A380 aircraft.It said they posed no safety threat and had not damaged the plane’s popularity with travellers.”This is a maintenance issue — it has nothing to do with the safety of flights. It is unfortunate we have to replace some of those parts but it happens,” Leahy said.In comments to the Australian Financial Review, Leahy said overall the massive passenger jet was well received and there was surprise when one engine on a Qantas A380 exploded after taking off fromSingaporein 2010.

In that incident, the plane returned safely to Singapore but the uncontrolled mid-air explosion, caused by an oil leak in a turbine, triggered serious safety concerns at the time.”There was a little bit of surprise when the Rolls engine blew up at Qantas but that was handled very well by Qantas and Rolls-Royce and people are quite happy with the outcome,” Leahy said.The A380, which entered service in 2007, is the world’s biggest passenger jet and a key product in Airbus’s line-up as it battles its main rivalUSgiant Boeing for the top spot in the world civil airliner industry. – Brecorder