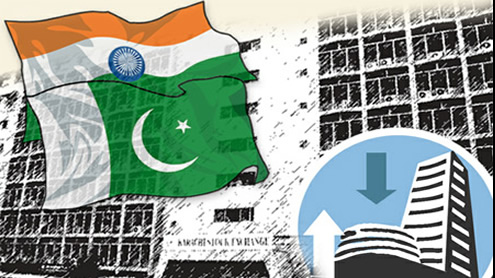 He hailed the Indian decision to allow Pakistani citizens and companies incorporated in Pakistan purchase of shares and convertible debentures of an Indian company under foreign direct investment (FDI) scheme, subject to prior approval of the Foreign Investment Promotion Board of the government of India. Commenting on Indian Reserve Bank on India’s decision, Chaudhry informed that technically under Companies Ordinance of Pakistan Indian companies can come to Pakistan and open an account for making investment in shares of Pakistani companies.  However, Ministry of Interior bars Indian citizens to become director of a company incorporated in Pakistan and in Pakistan so far policy is not so clear on the subject.

This Inter-ministerial Committee should be comprised of ministries like foreign affairs, finance, commerce, Securities and Exchange Commission of Pakistan, Board of Investment and other key stakeholders, he proposed.  He said that India has barred Pakistani investment in some key areas and similarly, Pakistan should also place similar safeguards upon Indian investment. He was of the view that in Pakistan Indian citizens and companies should be barred from making investment in defence, nuclear, ports and shipping, mining and oil and gas exploration being sensitive in nature.  Text of the decision of the Indian Reserve Bank released by Indian High Commission Islamabad captioned ‘FDI by citizen or entity incorporated in Pakistan’.

Attention of authorized dealer (AD Category – I) banks are invited to the Foreign Exchange Management (transfer or issue of security by a person resident outside India) Regulations, 2000 notified vide Notification No. FEMA 20 / 2000 -RB dated May 3, 2000 (hereinafter referred to as Notification No FEMA 20), and as amended from time to time. In terms of Sub-Regulation (1) of Regulation 5 of the Notification ibid, a person resident outside India who is a citizen of Pakistan or an entity incorporated outside India in Pakistan, is not allowed to purchase shares or convertible debentures of an Indian company under FDI scheme.

It has now been decided that notwithstanding anything contained in Sub-Regulation (1) of Regulation 5 of the Notification No FEMA 20, a person who is a citizen of Pakistan or an entity incorporated in Pakistan may, with the prior approval of the Foreign Investment Promotion Board of the government of India, purchase shares and convertible debentures of an Indian company under FDI scheme, subject to the terms and conditions specified in Schedule 1 of the Notification, ibid, provided further that notwithstanding anything contained in Schedule I of the Notification, ibid, the Indian company, receiving such FDI, is not engaged or shall not engage in sectors or activities pertaining to defence, space and atomic energy and sectors or activities prohibited for foreign investment.

AD Category – I banks may bring the contents of the circular to the notice of their customers and constituents concerned. The directions contained in this circular have been issued under Sections 10(4) and 11(1) of the Foreign Exchange Management Act, 1999 (42 of 1999) and are without prejudice to permissions and approvals, if any, required under any other law. -Dailytimes