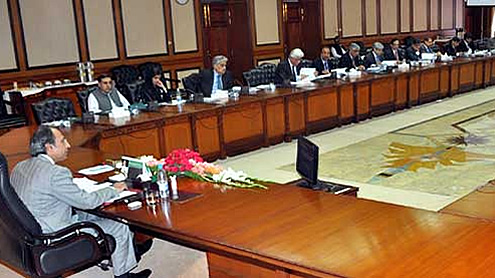 ISLAMABAD: Federal Minister for Finance and Economic Affairs Dr Abdul Hafeez Shaikh has reiterated the government’s resolve to end the circular debt issue by good corporate governance, tariff regime and the clearance of backlog by stakeholders. He was talking during a meeting with Douglas G. Alexander, Shadow Foreign Secretary and member of the Labour Party, United Kingdom here on Monday. The minister dilated on the role of state in the economic sector for ensuring transparency and a level playing field to private sector.

Dr Hafeez Shaikh said that the present political government was exercising self-restraint on expenditures and striving hard to make this year, a year of consolidation in economy. He expressed the hope that the capacity of provinces in financial management would be enhanced as 60 percent resources have been transferred to them by the Centre in the light of the 7th NFC Award. With regard to his recent visit to Washington where he attended annual meetings of the International Monetary Fund (IMF) and World Bank, the Finance Minister said that Pakistan’s credibility at international level had enhanced due to its performance in export sector i.e. $25 billion, forex reserves up to $18 billion, and $11 billion home remittances.

“We intend to continue reforms in economic sector not because it is of the requirement of the World Bank and IMF but we sincerely believe that much has to be done in our own interest”, he added. Douglas G. Alexander is a British Labour Party politician who has been an MP since 1997. He was the Secretary of the State for International Development until May 2010. He has also held the posts of Shadow Secretary of the State for International Development and Shadow Secretary of State for Work and Pensions. Douglas G. Alexander hoped that various measures taken by the Pakistan government would help it broaden the tax base and reduce the budget deficit at a substantial level. He appreciated the government’s initiative and policy of reconciliation in resolving the economic issues.- brecorder