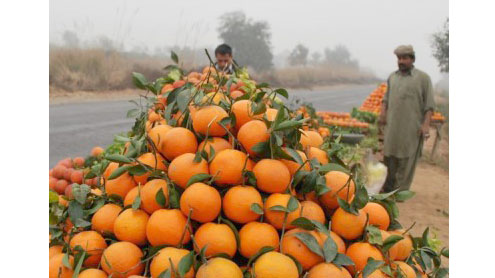 ISLAMABAD: This year orchards in Sargodha have hit with weather issues causing the delay of harvesting for 3-week more and now the Kinnow season will start on first week of December as before it started on November 20.

The chemistry of Kinnow crop required cold weather in order to get quick colour and taste, said CEO Harvest Tradings Ahmad Jawad in a statement issued here today.He said that the abundant produce and unique taste has enabled Pakistan to become the No. 1 exporter of Kinnow in the world.”As the sweet content is less than the acidity content, the fruit from Sargodha has a longer shelf life which is also one of the reasons for its increasing demand”, Jawad added.He said that at this point, Pakistan is earning huge foreign exchange from the export of Kinnow. There is capacity to increase this amount. At present, there is little or no government intervention and assistance”, he remarked.

Jawad added that there should be export zones and dry ports for the exports of Kinnow.The CEO Harvest Tradings Ahmad Jawad mentioned that this year the production of Kinnow will be 20,00000 ton and expected to export around 300,000 ton through private sector.”In International market this year the rate of kinnow will be $ 4 per 10 kg as compared last year it was $ 5 per 10 kg on average so till date limited export will dispatch only in Dubai and Jeddah,” he observed.Ahmad Jawad briefed that in Pakistan the consumption of Kinnow is 1400,000 ton and 600,000 is surplus in which 50% we export almost every year.

He said that last year the export target of Kinnow was 260,000 tons but due to weather conditions it was exported 215,000 tons.He stressed that the government and other financial institutions make some policy for export sector especially for horticulture.The CEO Harvest Tradings suggested that banks may provide finance to SMEs on cash flow base lending rather than security and collateral requirements, which would greatly help the SMEs to overcome their financial problems and they would be able to develop their business with the support of the banks.He said that it is high time that both local and foreign investors should see Pakistan with fresh eyes and help Pakistan in its struggle to provide its people with better life, improved living standards, health and education facilities to the citizen and bringing peace in the society which is possible with improved economy in the country. – Brecorder