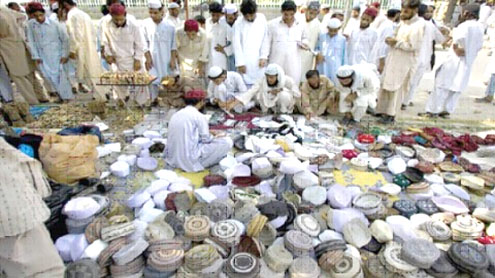 For Muslims, Ramadan means a break from the everyday. Along with the fasting, prayer and devotion, “the pace of life changes significantly during this month,” says Nader Hashemi, professor of Middle East and Islamic Politics at the University of Denver’s Josef Korbel School of International Studies.

“The time for entertainment and traveling is severely limited, you spend time with immediate family. They’re celebrating, gathering. Mosque attendance goes up. It’s a month of charity, of more giving to the downtrodden,” Bruce Kennedy of the Daily Finance reports.In countries where Islam is the majority religion, daily work schedules are often turned upside down during Ramadan, which will start in a week’s time. “And what happens, by and large, is most government offices and most national businesses tend to slow down or almost shut down, so that people can basically rest during the hot daylight hours,” says Riz Khan, a broadcast journalist who has worked with BBC, CNN and most recently Al Jazeera English in Washington DC. “Everything comes to life in the evening after sunset.”

On some stock markets, there is reportedly a “Ramadan Effect,” a month-long rally. “During the Holy Month, we find that on average, stock returns are almost nine times higher in predominantly Muslim countries than during other times of the year,” finance professor Ahman Etebari recently told the Voice of America. But Riz Khan notes that Ramadan does not necessarily mean traders can take a holiday, especially during the current global economic downturn. “Talking to my friends in the financial world in places such as Dubai…they are aware of the fact that they need to keep up with the West,” he says. “The Arab markets cannot lag behind so far that they end up being adversely affected.”

RISING PURCHASING POWER: The holiday also means special foods. “Based on the example of the Prophet Mohammed (pbuh), Muslims are encouraged to break their [daily] fast with dates,” said Hashemi. “Probably these people don’t eat a lot of dates during the year, but date consumption skyrockets [during Ramadan], as do certain special sweets eaten during the Eid festivals.”In the US, the market for halal-certified foods (permitted by Islam) has soared in the past decade. The Islamic Food and Nutrition Council of America (IFNCA) recently estimated an 80 percent growth in the market for halal-certified ingredients and food products since 2005.

“This increased interest for US halal market ingredients and products,” according to the IFNCA statement, “may reflect the overall estimated $170 billion US dollar purchasing power of American Muslims.”In the Muslim world, Ramadan also brings with it new clothing and special entertainment. “Television scheduling is very much geared around that,” says Khan. “Programming for the Ramadan month is specifically made for the huge audiences that watch it. Soap operas [and other] types of programming are very, very popular.”

But like Christians who bemoan the commercialisation of Christmas, many within the Muslim community are concerned that Ramadan is losing its meaning and becoming a commodity. “Many people fear the original reason of the fast has been lost,” says Khan. “These things have given away to, in some cases, overindulgence in the evening and overnight. People stay up all night and they overeat. In some places food consumption goes up two or three times…and people actually put on weight during Ramadan, which defeats the purpose of it. People are inverting their days and finding an easy way out and then overdoing it.”

A TIME TO BUY: Ramadan ends with Eidul Fitr, a celebration of feasts and gift-giving. Like Hanukkah or Christmas, Eid and other Muslim holidays have become major sales opportunities for retailers. In fact, Best Buy (BBY) came under criticism from some organisations last year for a line on one of its ad circulars wishing Muslims a “Happy Eid al Adha.” A spokesman for the Council on American-Islamic Relations (CAIR) said the Best Buy ad “makes perfect business sense to acknowledge and celebrate a holiday that one out of four people celebrate.”

Muslims parents in the US, says Hashemi, often see Eidul Fitr as a way of compensating for their children celebrating a holiday other than Christmas. “They will use that as a way of reminding young Muslim-American kids that they will be able to exchange gifts. They’ll buy their young children the equivalent of what a Christian American family would buy their young children on Christmas Day. So they won’t have a tree, but they’ll use that day to go buy significant gifts to make their children happy.”“You can think of it as parallel to Christmas,” says Khan, “in the sense that it is definitely families coming together, people hosting each other, the exchange of gifts. Kids love it because they get their presents, and they get a lot of attention.” – PT