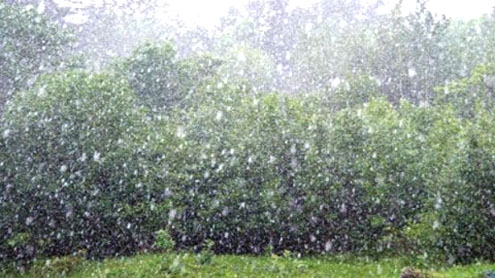 KARACHI: The economic observers foresee more backbreaking inflationary pressures in the coming months as poor rainfall during this monsoon season is expected to adversely impact the agricultural produces that might lead to the widening of gap between the supply and demand for food items.

With official data showing the headline inflation in the country sliding down to a single digit, 9.6 percent year-on-year (YoY), during the month of July against 11.3 percent of the same period last year, the analysts predict tough days ahead for the consumers, who have been braving a backbreaking double-digit inflation for years, on the back of lower than expectation rainfall during the rainy monsoon season, a bad omen for water-intensive agriculture sector. Agriculture output contributes over 21 percent in Pakistan’s Gross Domestic Product.

“Rainfall during this monsoon season has not stood as per expectations,” viewed InvestCap Reserach’s Abdul Azeem.The analyst warned that the less water availability situation due to low rainfall in the country could hurt the supply side situation in agriculture segment that may induce more inflation in the months coming ahead. “Therefore, for the next year we estimate the CPI inflation will stand in double digit,” Azeem said.The figures released by the Pakistan Bureau of Statistics, however, show that the headline inflation in July had decreased by 0.25 percent month-on-month (MoM) to 9.6 percent against 0.04 percent during June. The analysts attribute this downward move in price hike mainly to decline in the group of housing, water, electricity, gas and other by 3.54 percent, which holds 29.4 percent weight in overall CPI basket.

In the same group, the analysts said a massive decline of 49.2 percent MoM and 3.84 percent MoM in gas and kerosene prices respectively were the major reasons behind the significant decline in CPI contributed by this group.Similarly, they said, transport group prices also witnessed decline of 2.4 percent MoM as motor fuel prices posted a decline of 8.82 percent MoM. Communication group sector prices also fell by 0.05 percent MoM, which was mainly contributed by communication and apparatus items during Jul-12. On yearly basis, the highly weighted items (21.8 percent) House rent in the country increased by 6.52 percent YoY, while gas and prices down by 34.25 percent YoY during Jul-12.

About the future outlook, the analysts said the decline in international oil prices inducing a cushion effect to local oil POL price during the last couple of months, however, the upward reversal in international oil prices remain the question mark for the increase in inflation going forward.However, they said, as per the pattern of treasury bills seen during last two auctions, there was a strong expectation of discount rate reversal existed in the market. However, considering the impact of Ramadan factor and variability of POL prices yet to be seen, we expect SBP to maintain the discount rate at current level, they added.

Contempt of court law struck down as unconstitutional, illegal