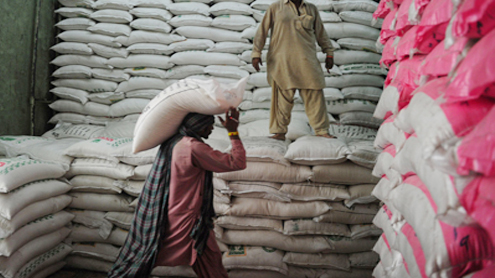 ISLAMABAD: The Pakistan Economy Watch (PEW) on Sunday asked the government to act immediately as the country was inching towards a severe food crisis.

The food insecure masses of Pakistan will have to pay a heavy price if the government continued to delay decisions regarding import and export of wheat as local stocks are not enough to meet food requirements until the next crop, it said.The situation of wheat reserves is far from satisfactory, as around 7.5 million tonnes of commodity with the federal and provincial governments is insufficient, said Dr Murtaza Mughal, President PEW.

According to an independent estimate, Pakistan produced a total of 22.8 million tons of wheat in 2013 which was 2.2 million less than the set target of 25 million tonnes, he added.He said that further delay in taking the right decision will harm the masses and government while hoarders will stand as the ultimate benefices as usual.Dr Murtaza Mughal said that increasing smuggling, hoarding and exports have put additional strain on wheat reserves which can be controlled through a ban on exports which has reached above 1.5 million tonnes.

On the other hand, wheat imports have become meaningless for many in presence of five per cent WHT which must be abolished or reduced to avert threat of food insecurity.Otherwise, he said, soon there would be a shortage only to benefit the hoarders who remain untouchable for the authorities concerned.Dr Murtaza Mughal said that currently ample quantity of wheat was available in the international market at a reasonable price but delay in the decision will jack up international prices. – Brecorder