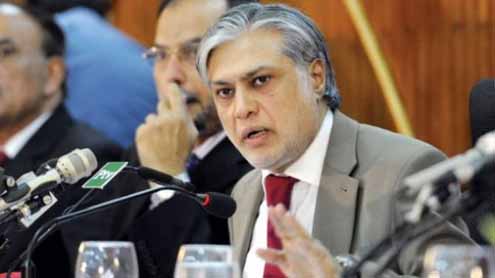 WASHINGTON,Finance Minister Ishaq Dar Wednesday said Islamabad is implementing a series of long-delayed reforms to turn around the broken economy, as he underlined that small gains are already evident that a new comprehensive economic regime is taking shape.

He also held out a categorical assurance to the gathering of experts and scholars that as member of the national command and control authority he can state firmly that Pakistan’s nuclear assets are completely secure and there is absolutely no chance of their falling into wrong hands.Dar referred to a number of fiscal, taxation and energy sector reforms and said the government’s steps have enhanced international confidence in Islamabad’s commitment to improving the economy and spurring the growth.Recounting the steps the new government has taken since its inception early this summer, he said it is resolved to curb inflation, increase tax to GDP ratio, expand revenues,  and has already paid off around Rs 500 billion circular debt to address energy woes.  Additionally, he said, the fiscal deficit has been scaled down to 8.2 percent.The challenges the government inherited included low economic growth, high fiscal deficit, runaway inflation, dwindling investments, depleting reserves, unstable exchange rate and crippling energy shortages.

Within less than a month of assuming the office, he said the government finalized the new IMF  program, which should have been concluded at least one year earlier. He added the program came after the government’s budget incorporated all major structural reforms that were needed to give a kick-start to the economy.The reforms are already leading to positive signals and the international financial institutions and investors have now much greater confidence in Pakistan’s economic progress compared with recent past. He said after Islamabad entered into a program with the International Monetary Fund, other financial institutions like the World Bank, Asian Development Bank and others are now ready to partner in Pakistan’s economic development.He cited a business confidence survey undertaken bi-annually by Overseas Investors’ Chamber of Commerce and Industry (OICCI) and released in August, has brought the confidence level in the positive territory of +2 from -34 to which it had sunk for nearly two years.He also referred to the government’s commitment to address long-term energy and water needs of Pakistan and said it is working towards realization of both the Dasu and Diamer Basha dams.

On bolstering tax revenue collection, he said in first three months ,the government has issued over 30,000 notices to tax evaders.He renewed Islamabad’s commitment to addressing the challenge of extremism, underlining that “economy cannot flourish unless we address this menace”. In this regard, he also referred to the decision of the All Parties Conference last month.Responding to a question on granting Most Favored Nation status to India, he said Prime Minister Nawaz Sharif is committed to having better relations with neighbors including India. However, he observed, the two countries should move forward simultaneously on trade and all other issues in the composite dialogue. You have to take all things forward.We are keen to move forward the composite dialogue”, he stated.Dar felt there were some political difficulties on the Indian said to push forward the comprehensive peace process ahead of general elections.  -App