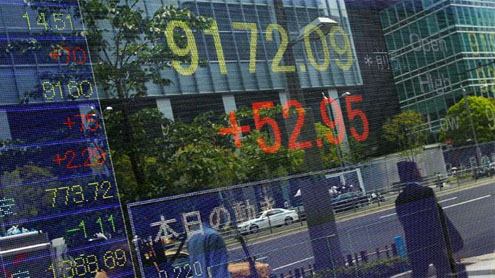 NEW YORK: The euro, oil and stocks fell on Tuesday as Greece’s commitment to bailout pledges was put into question following elections, threatening possible wider repercussions in the euro zone.

The results of weekend polls in Greece and France, in which voters soundly rejected austerity measures, heightened the uncertainty of the path ahead for the euro zone debt crisis.A broad measure of Greek stocks dropped to its lowest in almost 20 years and France’s CAC 40 lost 2.8 percent, while Wall Street’s benchmark S&P 500 hit a two-month low.The uncertainty in Europe put a bid under safe-haven assets, sending benchmark German yields to a record low of 1.542 percent. The increased aversion to risk also underpinned demand at a sale of Dutch and Austrian bonds.

Oil prices fell for a fifth straight session on the prospect of weaker growth on both sides of the Atlantic at a time of ample supply from major oil producers.Brent crude fell 2 percent below $111 a barrel, and US crude lost 2.3 percent to trade below $96.Greek voters on Sunday punished the two mainstream parties for supporting the austerity conditions of a bailout. In a statement likely to reduce his chances of success, Alexis Tsipras, the leader of the Left Coalition party, began efforts to form a government by renouncing the bailout terms and threatening to nationalize banks.If Greece doesn’t stick to the bailout terms it could run out of money as soon as next month, officials estimate.

The euro was down 0.6 percent at $1.2982, off Monday’s low of $1.2955 but below $1.30 for a second session.”The euro reacted to the Greece headlines, but the move lower has faded a bit because what (Tsipras) said was not so unexpected,” said Camilla Sutton, chief currency strategist at Scotia Capital in Toronto.”The euro remains extremely vulnerable to political risk and if we close below yesterday’s low of $1.2955, that would potentially shift the technicals into bear territory.”Gold traded below $1,600 an ounce for the first time in four months, continuing its close correlation with the euro. Spot gold was down 2.5 percent on the day at $1,597.

It will be difficult for Greece to raise money to pay off its debt, whether or not they stay in the euro zone, Fier said.”If the euro zone is mired in recession for a while, that will put a crimp on (the US economy) as we try to expand.”The political turmoil added to concerns over a possible Franco-German split on how to tackle the region’s debt crisis.Financial markets are concerned that France, where president-elect Francois Hollande has also opposed drastic spending cuts, could derail the German-led push for austerity in Europe and trigger a new phase of the bloc’s debt crisis.The benchmark 10-year US Treasury note was up 14/32 in price, with the yield at 1.828 percent. – Brecorder