by top3
in Markets
0 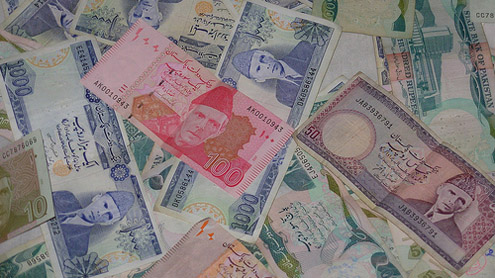 The dollar crossed the new high against the rupee at 94 in the currency market on Thursday, in the meantime, later, in the evening, the State Bank of Pakistan (SBP)’s clarification helped the rupee to reduce it’s losses in process of trading, dealers said.

INTERBANK MARKET: The rupee fell sharply against dollar, losing 85 paisa for buying at 93.95 and losing 80 paisa for selling at 94.00, they said. OPEN MARKET RATES: In sympathy with the interbank track, the rupee the rupee tumbled versus dollar, falling 60 paisa for buying at 94.30 and it losing 70 paisa for selling at 94.60, they said. The rupee also inched down by 20 paisa in relation to the euro for buying and selling at Rs 117.00 and Rs 118.00, they added. In the evening session, the rupee shed its losses versus dollar as trading at 93.53 and 93.60 in the interbank market dealings, and in the open market, it was at 94.00 and 94.50 versus dollar, they said. It is hoped that the impact of the statement by the governor of the central bank may not prove short-lived, the rupee is likely to perform at a certain level in relation to dollar amid budget 2012-13 speech.

Commenting on the free-fall of the rupee, Malik Bostan, president of the Forex Association of Pakistan (FAP) said that the rupee lost over three percent versus dollar during the month due to massive buying of dollars. He attributed the decline to the forward and speculative buying of dollars, at a point the dollar was trading at 94.80 in the open market, this was day’s high, he added. After the State Bank of Pakistan’s (SBP) governor’s, clarification the rupee rebound and reduced its losses in the evening, he said. The governor said that the decline in our projected reserves will be partially offset by an increase in remittances, which will exceed 13 billion dollars this fiscal year, and additional foreign direct investment (FDI) in the pipeline that includes US company investment in the power sector. Now it’s necessary that the State Bank of Pakistan (SBP) juts keep vigilance over the fluctuations of the rupee versus dollar, experts said. During the day, the rupee hit all-time low at.80 versus the dollar, market sources said and adding that the dollar available at 97 for 180 days L/C (Letter of Credit).

According to the Reuters: In the fourth Asian trade euro was poised for its biggest drop in at least eight months as the increasing likelihood of Spain needing outside assistance to fix its public finance and banking system led to a major escalation in the perennial crisis in the currency bloc. Spanish government bond yields surged to a six-month high while German bond yields fell to record lows, pushing the spread between the two to a new high and adding stress to markets already frayed by anxiety that Greece may leave the euro zone. “Things are starting to look ugly. It seems like the market is making Spain its next target after Greece,” said Teppei Ino, currency analyst at Bank of Tokyo-Mitsubishi UFJ. The euro fell to as low as $1.2358, a level last seen in mid-2010, when it had bottomed at $1.1876. It last stood at $1.2388, having dropped 6.4 percent this month, the biggest since September.

Against yen, the common currency fell as low as 97.352 yen, edging near an 11-year low of 97.04 yen hit in January, with many traders now considering a break of that low as highly likely. Interbank buy/sell rates for taka against dollar on Thursday: 81.94-81.94 (previous 81.92-81.94) Call Money Rates: 9.25-15.00 percent (previous 9.00-15.00 percent). The yuan posted its biggest monthly drop on record in May, responding to the continuous strengthening of the US dollar in global markets and a conspicuous slowdown in China’s economic growth, traders said. Spot yuan fell 0.18 percent to close at 6.3690 versus the dollar, weakening from Wednesday’s close of 6.3577.-Brecorder