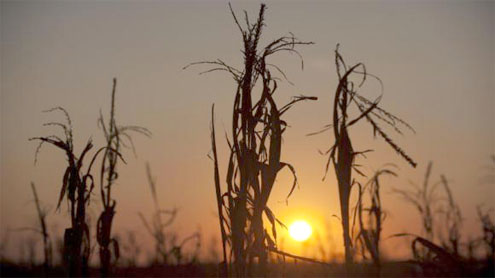 The surge in prices, mainly due to the devastating heat wave across the central US, which produces the world’s largest crops of corn (maize) and soybeans, places in danger millions around the world, especially in countries dependent on imported grains, according to the bank.From June to July, the prices of both corn and wheat jumped by 25 percent while soybeans were up 17 percent. Corn and soybean prices topped their previous record highs in the food price crisis of June 2008.

The other key global staple, rice, was four percent lower, however.That left the World Bank’s food price index six percent higher than a year earlier and one percent higher than the February 2011 peak.“Food prices rose again sharply threatening the health and well-being of millions of people,” World Bank President Jim Yong Kim said in a statement.“Africa and the Middle East are particularly vulnerable, but so are people in other countries where the prices of grains have gone up abruptly.”

The World Bank called countries in the Middle East and North and Sub-Saharan Africa the “most vulnerable to this global shock.”“They have large food import bills, their food consumption is a large share of average household spending, and they have limited fiscal space and comparatively weaker protective mechanisms,” the Bank said in its Food Price Watch report.“Domestic food prices in these regions have also experienced sharp increases even before the global shock due to seasonal trends, poor past harvests, and conflict,” it said.

The World Bank said that the diversion of corn to produce ethanol biofuel — which takes up to 40 percent of US corn production — is a key factor in the sharp rise in the corn price.The UN Food and Agricultural Organization’s chief called earlier this month on Washington to rescind its mandate for fuel producers to use ethanol in gasoline and other fuel products, to ease the pressure on corn prices.

The World Bank pointed out that there is also a spillover effect on wheat prices: that as corn supplies tighten, wheat becomes used more as a substitute for corn in livestock feed.Reacting to the report, Oxfam spokesperson Colin Roche criticized the lack of action from the Group of 20 leading economies to address the soaring food prices.“Oxfam is already seeing the devastating impact of food price volatility in developing countries that rely on food imports,” he said.“The G20 has decided to wait for September’s US crop report before deciding whether to take action on food prices, but they must call it now before prices spiral out of control and push more people into hunger.” – Arabnews