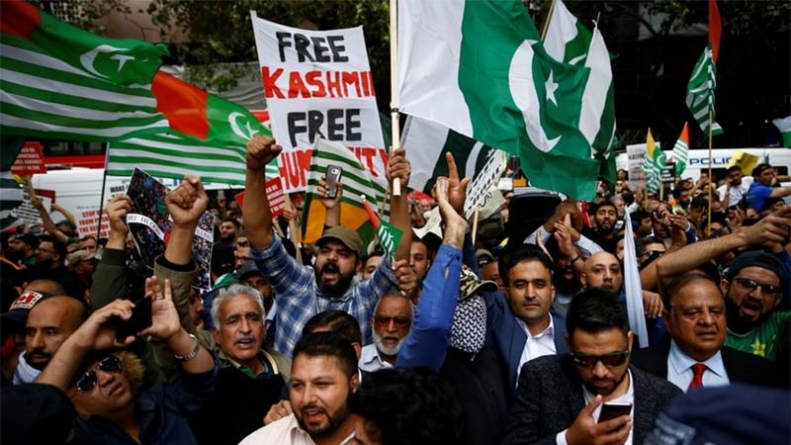 In such a situation, it is clear & crystal that Indian democracy is no more, now it has been converted into Hindutvacracy. Actually the secularism of state was burried on very day when RSS member NR Godsey killed Gandhi & doddur of saffron terror now made India as saffron state instead of secular. On the footsteps of Nazism, The Sangh Parivar Saffronists advanced plan of colonialism, the state of Jammu & Kashmir captured by India in 1947 is not its sovereign territory, it is a worldly recognised disputed area & Kashmiris are not its citizens, suffering massive inhumanity of Indian Forces since seven decades.

Now The Kashmir has become largest ever Jail of the world, Indian brutalities left behind the stories of Guanta Namo Bay where all the houses are made barracks, whole population is prisoners, no one is allowed any access, completely media & internet blackout by Indian Gov’t. Concerning is that the statements of RSS & BJP leaders, directing their workers to gang rape Muslim females, their might be largest ever rape score in Kashmir, if we see the statements of Indian Army Chief & some BJP leaders to eleminate militants from valley are the lisence to kill to indian forces, this is the main reason of media & internet blackout. 74 years back on 14th August World War ended with unconditional surrender of Japan, In this very month USA dropped atom bombs on Hiroshima & Nagasaki resulted great loss of humanity.

According to a roughly estimate about 6 crores people victimized in WW-ii but due to Indian hegemonic design once again a serious threat is lying on the head of humanity, the details of brutalities suffered by Kashmiris during ongoing nefarious Curfew will be public after the lifting of media & internet blackout, seeing massive reaction from Pakistan, Indian Defence Minister given threat of using atomic bomb which proves that there is massive state sponsored atrocities are being made in Kashmir. Astonishingly on Hindutva’s hegemonic plan & advancement of colonialism, the world is silent but the same nations had not tolerate Taliban Gov’t in Afghanistan, declared them extremists & fundamentalists, it is dual standard of world powers who are not paying heed on Hindutva saffronism despite global protests.

If any planted incident took place in India, the world started to condemn Pakistan without any proof but despite hundreds & hundreds of Bomb blasts in Pakistan, the same powers never question India even its R&AW officer Kulbhushan Jadhev caught red handedly who not only confessed but there is solid proofs of his involvement in terrorism in Pakistan, in this regard India’s modified arguments & N Modi’s speech of 2016 on Indian Independence Day are sufficient. Soon after the abrogation of article 370 by India The RSS leaders tweeted that After Kashmir they will separate Balochistan from Pakistan, it shows clear Indian involvement in Balochistan.

On “Bigo live” a social plateform, many Indians specially RSS workers held meetings with Banned BLA activists on regular basis & N Modi while addressing in Bangladesh confessed himself publicly of involving in terroristic activities in East Pakistan but the World remain deaf. Whenever Indian Officials questioned on their atrocities in Kashmir, istead they respond or regard internation norms, they accuse Pakistan of supporting militants which is not the answer of indian atrocities & violations. Now it is the time, International Community to awake & take solid steps to block Indian hegemonic plan of colonialism & enslavery otherwise it will be too late, no longer it will soon erupt a horrible nuclear war.