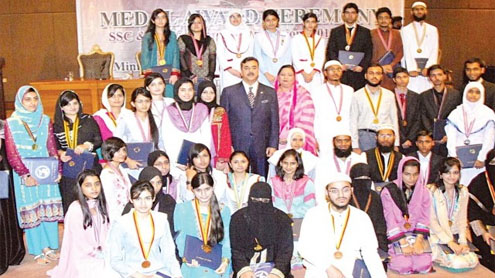 ISLAMABAD: Prime Minister Syed Yusuf Raza Gilani Friday said education was the key to the success of a nation and to help it confront the challenges.Addressing a function here at the PM Secretariat to award the top students of the Federal Board of Intermediate and Secondary Education Prime Minister Gilani said health and education were his priority areas and desired that the Pakistani students excel in all fields.

“Only an educated nation can survive in a fiercely competitive world,”Gilani told the gathering comprising beaming students who got the first three positions in 2010 and 2011 in Senior and Higher Secondary School Certificate.Prime Minister Gilani who handed over gold medals, cash awards of Rs 50,000, Rs 40,000 and Rs 30,000 respectively amongst the first, second and third position holders and urged them to serve as role-models and lead by setting good examples.He said after the 18th amendment education has been devolved to the provinces but assured that the federal government would provide them full assistance in helping meet the Millennium Development Goals.

He said the parents also need to understand their responsibility that education up to primary was compulsory and vital for national development. He appreciated those who had to cut down on their other needs to educate their children and said it would go a long way in progress and development of the nation.Prime Minister Gilani also asked the private sector to help the government promote education and particularly mentioned that he announced setting up of a cadet college at Dadyal, Azad Kashmir and was assured that the overseas Pakistanis would help the dream come to a reality.He also directed that there should be no discrimination amongst the different educational boards, across the country, and to ensure that the top achievers get a similar reward.

Prime Minister Gilani asked the students to get necessary skills through the National Vocational and Technical Training Commission (NAVTEC) as the modern world was in dire needs of highly skilled people.Prime Minister Gilani advised the young students to give due respect and honour to their teachers as they were the builders of their foundations. He recalled one of his Sri Lankan teacher, who met him during his visit to the island nation. He also mentioned Professor Mehdi Hassan and Khalid Khan and said he has high respect for all those who taught him.He said the success of a government depended on the consistency of policies it pursued and said his government was committed to the provision of best possible education to the young generation.

Prime Minister particularly noted that the number of girl students was much higher than the male students and said the government has already allocated a 10 per cent quota for women in government jobs and desired they excel in all areas and serve the nation.Prime Minister Gilani handed over 4 gold and 5 silver and bronze medals each amongst students of SSC, while 12 golds, 11 silvers and 13 bronze to the HSSC students.The students of SSC in 2010 who got first positions include Hareem Nisar in Science group and Afshan Zahra in Humanitarian Group. In HSSC 2010 Hina Tanvir in Pre-Engineering, Sameen Shaukat, Tayyab Mahmood and Azka Zainab, with a tie,got first positions in Pre-Medical group. While in SSC 2011 Arooma Majid in Science Group and Saad Jan in Humanitarian Group got first positions.

In HSSC 2011 the first position holders were Fatima Khalid in Pre-Engineering Seema Kanwal in in Pre-Medical, Maria Hamadani in Science General Group, Anab Sundus in Humanities and Saima Faiz in Commerce Group.Mian Riaz Hussain Pirzada, Minister for Professional and Technical Training in his brief remarks said there was a need to further strengthen technical training in the country.

He also urged students to give due respect to their teachers and parents and to focus on their studies to earn a good name for the country.Dr Mrs Shaheen Khan, Chairperson FBISE said in 2011 out of 61,015 students of SSC 48,773 were successful with a percentage of 79.94 per cent, while in HSSC 35,117 students were declared successful out of 46,355, showing a percentage of 75.76 per cent. – APP