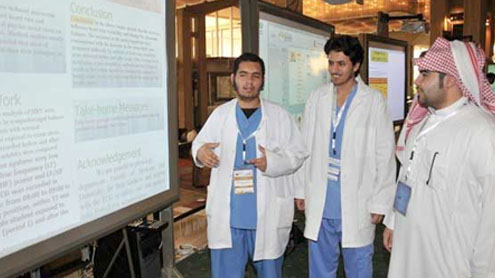 A number of students of medicine are suffering from depression, tension and anxiety which may have a negative impact on their academic performance, a new study has showed.

The study was presented by Abdulrahman Al-Sheikh and Ammar Al-Saigh, both students at the College of Medicine, Imam bin Mohamed Islamic University, at the First Saudi International Medical Education Conference.According to the study, a considerable disparity existed between first, second and third year students based on the depression anxiety stress scales (DASS). Third year students showed lower stress scales due to a college problem-tracking system which focuses on how to deal with student problems.

The study showed that 45.7 percent of the respondents were suffering from depression, 45.6 percent from anxiety and 41.4 percent from stress.Nihal Khamis presented a paper on the issue of credibility in evaluation tools and how to apply difficulty tests. Educational tools should be reliable and assessable, she said.

Professor Ronald Haroun touched on the basic skills of medical education. He called for an output-based education.Haroun stressed on the importance of the availability of suitable educational environment and qualified staff to facilitate the education process. – Arabnews