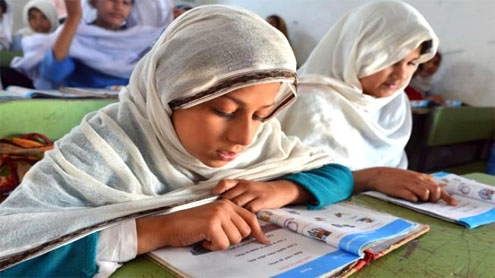 ISLAMABAD: The National Assembly on Tuesday unanimously passed a legislation to provide free education to children between five and 16 years before the House witnessed a walkout by the MQM over poor law and order in Karachi.

On a private member day, the bill moved by PPP MNA Yasmeen Rahman received support from all parties. PPP Chief Whip Syed Khursheed Shah said the bill, the Right to Free and Compulsory Education Bill 2012, takes the support even from constitution that calls for provision of free education to all citizens of the state.

Although the mandate of the bill is limited to the federal capital territory as the education is a devolved subject, Shah hoped that provinces would also follow it because this is an important piece of legislation for promotion of education in the country.

Talking about the bill, PPP lawmaker Shehnaz Wazir Ali said that the legislation was need of the hour, as currently 7.2 million children were not going to schools. She felt that standards of education should be redefined because failure on this front had not produced quality education.

Later, speaking on a point of order, MQM legislator Abdul Qadir Khanzada talked about security situation in Karachi and said that silence on part of two major political parties in this regard was deplorable and staged a walk out from the session. He said if a clear statement of the government did not come on the floor of the House by Wednesday (today), the party would boycott whole session of the National Assembly.

Commenting on the walkout, PML-N member Sheikh Rohail Asghar, said “On one hand they [MQM] complain, and on the other hand, they stage walkout. If they are so wary of the government, why they don’t part their ways from the government,” he remarked.

PPP’s Nawab Ghani Talpur said that walkout was not solution and suggested a committee of parliament should be formed to visit Karachi and Hyderabad to submit its report within seven days. He believed that situation in Karachi and interior Sindh could be tackled by sending Karachi Police in interior Sindh and vice versa.