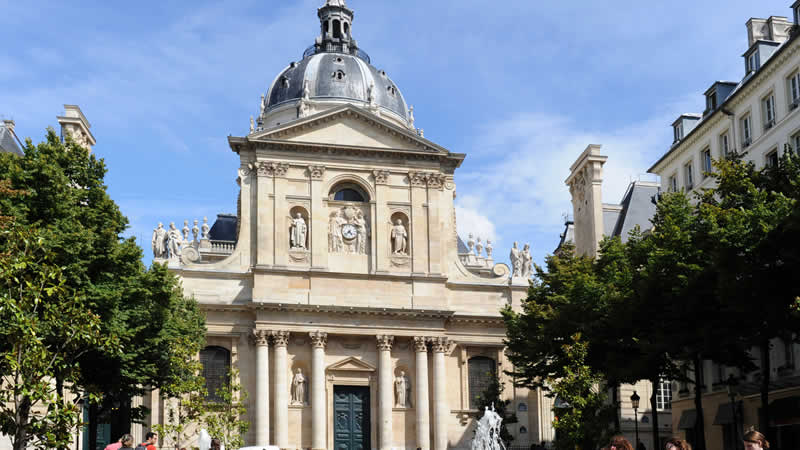 The true City of Lights (regardless of what Las Vegas or Johannesburg have to say on the matter), Paris is one of the most visited cities in the world, and commonly regarded as one of the most beautiful. From the patisseries and cafés, to the staggering architecture and infamous fashion sense, the richness of Parisian culture and history is evident everywhere.

So if you’re ready to pack your bags and head to the French capital, check out these 10 top universities in Paris, based on the QS World University Rankings 2018.

École Normale Superieure (ENS Paris) is the highest-ranked university in Paris and also in France overall, ranking 43rd in the world in the latest QS World University Rankings. Situated in the scholastic Latin Quarter, just west of the Seine in the center of the city, ENS Paris is within walking distance of famous sights such as the Notre Dame Cathedral and the Jardin du Luxembourg, the second-largest public park in Paris.

ENS Paris also offers the only residential campus in central Paris, along with two other campuses in the city suburbs. A research-led institute, the school is counted among the prestigious French universities which form the grandes écoles, and is particularly known for its departments of humanities and science. ENS Paris boasts an alumni community that includes 13 Nobel Prize winners, as well as all eight French Fields Medals winners – the most coveted prize for young mathematicians.

Ranked 59th in the world, École Polytechnique (ParisTech) is a founding member of ParisTech (an affiliated group of colleges focusing on science and business subjects) and receives its highest rank in the QS World University Rankings by Subject for mathematics, at joint 22nd place.

Although having once been situated in the Latin Quarter, ParisTech relocated to just south of the city in 1976. Now located approximately 30 kilometers outside of central Paris and with a community of over 4,600 students and teachers, ParisTech’s main campus offers over 160 hectares of open space and a range of outside sporting facilities which many campuses within the city center can only dream of.

The Université Pierre et Marie Curie (UPMC) is up 10 places this year to now rank 131st in the world, and is one of the largest teaching institutes of science and medicine in Europe, with more than 125 laboratories. Established in 1971 after the division of the famous University of Paris, UPMC has a community of 34,000 students, of which 20% are international students, and a faculty of 9,600 staff, of which 80% are in research structures. Divided among 18 different campuses in four French regions, UPMC’s central campus is located in the vibrant and historic Latin Quarter of Paris, neighboring the River Seine and the National Museum of Natural History. The Institute d’Etudes Politiques de Paris, commonly known as Sciences Po Paris, specializes in the humanities and social sciences, with approximately 35% of its budget being used to fund research in these subjects. Currently ranked 220th in the world, Sciences Po Paris has seven campuses across France, which are home to 13,000 students overall, of whom 47% are international.

Sciences Po Paris’s main campus is located in the Saint-Germain-des-Prés area of the capital, which was once the center of the existentialist movement associated with author Simone de Beauvoir and philosopher Jean-Paul Sartre. Today, the area continues to be a hub of creative culture and is also home to many famous Parisian cafés.

Ranked 242nd in the world in the latest QS World University Rankings, Université Paris-Sud 11 prides itself on its wide scope of multidisciplinary courses, and is spread across four campuses in the southern suburbs of Paris. The scientific campus in Orsay is the furthest from the city, set on 200 hectares of land which include woodlands and a botanical garden. While the Orsay campus is a 40-minute drive from central Paris, Université Paris-Sud 11’s medical school is much closer, in an area called Le Kremlin-Bicêtre, which is just an hour’s walk from the city center.

Currently ranked 269th in the world, the Université Paris 1 Panthéon-Sorbonne inherited the faculty of law and economics from the University of Paris, and is another prestigious institution for arts and humanities subjects, placing 23rd in the world for archaeology. One of the largest French universities, Université Paris 1 Panthéon-Sorbonne enrolls roughly 40,000 students in more than 14 teaching and research departments. Located in the vibrant Latin Quarter, the university operates across several famous historic buildings, including part of the Sorbonne itself, making it a prestigious and heritage-rich place to study in Paris.

The university’s main campus is a 20-minute train ride north of central Paris, although many students choose to live in the city center to be close to the liveliest areas. The school offers housing in the student-centered Latin Quarter and in other areas of the city. A relatively small community, the École des Ponts ParisTech enrolls just over 2,000 students, of which a quarter are female.

Université Paris-Sorbonne, or Paris IV, is a co-founder of the Sorbonne University alliance (another collective of leading French universities, which also includes UPMC) and is an inheritor of the arts, languages and humanities faculties from the original University of Paris.

Ranked joint 293rd in the world overall, Paris IV has a current enrollment of 21,000 students. Within the QS World University Rankings by Subject, it ranks particularly well for subjects within the arts and humanities, receiving its highest rank for modern languages (joint 18th).

The university has seven campuses in the lively and student-oriented Latin Quarter, where its cultural department organizes more than a hundred national and local arts events every three months, including operas, theater performances, poetry competitions, dance events and music gigs. After nearly half a century of existence, it’s recently been decided that Paris IV will merge with UPMC in January 2018 to create the new Sorbonne University, which will host around 55,000 students.

With its new campus located a few streets down from the National Library of France on the banks of the Seine, Université Paris Diderot, otherwise known as Paris 7, is currently ranked joint 305th in the world and is a multidisciplinary urban university within the eastern limits of the city. The school’s 2012 relocation away from the densely populated Latin Quarter, where many of the top universities in Paris are amassed, means Paris 7 may appeal particularly to students who are looking to combine an urban environment with a little calm and space.

It has a community of around 29,000 students, 35% of whom are international, and it inherited the University of Paris’s distinguished faculty of science. While known for its high standards of research in this field, it’s also strong across a wide range of subjects, including medicine, dentistry, art and humanities and the social sciences.

Up one place globally to now rank joint 355th, the Université Paris Dauphine is a multidisciplinary institution which specializes in subjects such as economics, math, business, IT, law and the social sciences. The university has three campuses in central Paris; the main campus is located in Porte Dauphine near the famous Arc de Triomphe and hosts 8,800 students and a faculty of 569 teachers. There is also a small school of journalism and one business center in the heart of the Parisian business district, La Defense. Proclaiming a “resolutely international outlook”, 30% of Université Paris Dauphine’s student body are from outside France.

10 Most Unique Smartphones In The World