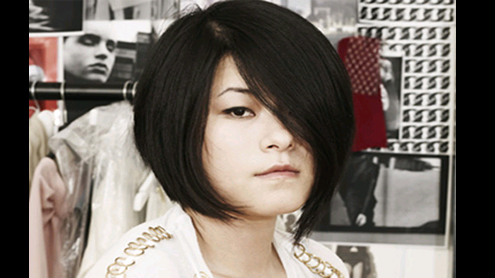 When Masha Ma first came to Paris, the Chinese designer, who today holds her first Fashion Week show in the city, had a style revalation as she was sipping coffee on a street corner.

“Just next to me, I saw this woman dressed exactly in my look, sitting there looking absolutely stunning in a beautiful blouse and long skirt,” the vivacious 30-year-old said.

“Now if I can see my woman just like that on the street, then I guess this is my city,” said the petite designer, bobbed jet black hair parted over one eye and long navy silk coat above black boots.

Ma was invited by the French fashion federation to join the official Paris Fashion Week calendar this year, as one of 22 nationalities in the line-up.She arrived from London where she trained at Central Saint Martin’s school of fashion, working as a student for Alexander McQueen among others, and going on to show three seasons at London Fashion Week.Raised by her grandmother in Shanghai, she left for the British capital aged just 16, having decided, inspired by an article about McQueen, that she wanted to “paint people with fabric”.

While London, she says, is the perfect place for a young designer, after a decade in the city, “it was about time for Paris.”

“London is all about originality. They are always looking for the next new thing, and you get right up there, really quickly. But it’s all about the looks, the level of finish is not so important.

“Paris is more about authenticity. They really appreciate quality,” said the designer, who sees pristine finishings as key for her young ready-to-wear brand, snapped up by Dolce and Gabbana’s Milan designer store among others.

“London was for the cool young girl, now my woman has an understanding of her body, she wants to portray herself with more depth.”

While Western designers regularly mine Asian traditions for ideas, with Belgium’s Dries Van Noten building his look this week on antique Chinese prints, Ma does not claim a specific Chinese lineage.

“People will ask me ‘How is this Chinese’?” she said. “It’s true my aesthetics were shaped by my Chinese roots, but I wasn’t really brought up with the Mao suit jacket.”

With a mother who worked at the United Nations, a university professor father and a grandmother who “played the piano and made me toast,” she explains hers was “not a typical Chinese life.”

“Some people think I’m from London, others from China — but that’s the point, fashion is international.”

She also points out that Shanghai — where France ruled a large concession until 1946 — was heavily influenced by Paris in the jazz age.

“You use your language in a modern way. Is it China? Is it not China? It is, and it is not at the same time. And that’s what makes it modern.”

What Ma does feel, however, is the need to counter the notion of ‘Made in China’ as a byword for lower-grade goods.

Two years ago, Ma showed her work as part of an event dubbed ‘China in Paris’, backed by the China National Garment Association and the French fashion federation, that aims to introduce young Chinese designers to Paris.

But she later decided she would rather go it alone.

“I want people to come to the show, and judge the clothes in a fair way, not because of a Chinese connection.”

That said, Ma admits she has received welcome support from the fashion media in China, with the Chinese editions of Vogue, Marie-Claire and Elle signing up to her Paris show. – Khaleejtimes