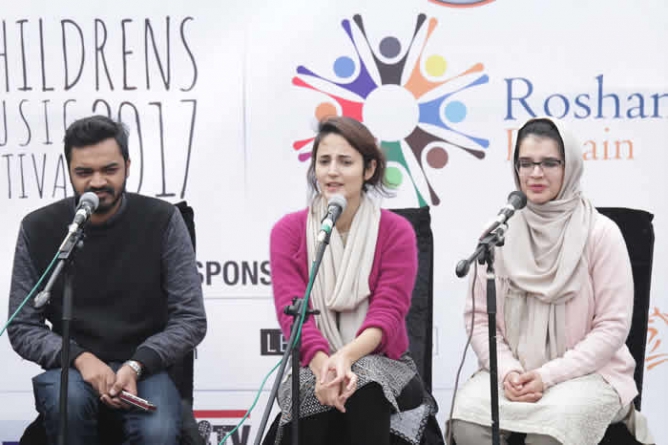 Pakistan’s first ever Music Festival for Children & Families was organized by Roshan Rahain in Lahore on 4th February’17. Roshan Rahain is a non-profit organization working to highlight the importance of teaching children using various forms of art including music.

The festival was held at Ali Institute of Education, one of the festival partners, and received an overwhelming response, with over 700 attendees including children, teachers and families. The main objective of the festival was to integrate music with learning, which was achieved successfully through carefully planned workshops covering various topics such as Introduction to Mosiqi and Mosiqar for the Sub-Continent, History of Singing and Listening to Qawwali and How To Set Up a Recording Studio from Scratch. Teachers and parents also attended the workshops with their children and thoroughly enjoyed the unique experience. Popular singer and former Pakistan Idol champion Zamad Baig attended the festival as a judge and performed at the closing of the festival. Families were also kept entertained by games and food stalls which were set up at the venue. Teachers who attended the festival shared their feedback by stating: Madeeha Ahmad, Principal LGS: “It was very engaging and entertaining experience for the children and such activities should be carried out often”.

Shiza Ahmad, Senior Teacher LGS: “It was amazing how children were engaged during the workshop, the overall experience was very entertaining”. Seemi Gul, Teacher Play Group, Ibe-Sina: “The concept of using music with learning was a good idea, the students, teachers and parents were all so engaged throughout the festival”. Shirmeen Ali, Student Counsellor, Beacon House: “We are very happy that we attended the festival, the entire festival was a perfect learning experience for children, parents and teachers alike”. CEO/Director of Roshan Rahain, Shaigan Azhar shared the overall objective of the festival by saying “The idea behind organizing the Music Festival was to introduce the concept of integrating music with learning skills of children, we worked very hard to put together series of musical workshops which were engaging and yet fun to attend.

We had hundreds of children, families, teachers who attended our festival and it was encouraging to see that almost all of them endorsed our idea. We will be bringing more innovative projects for children and families alike”.