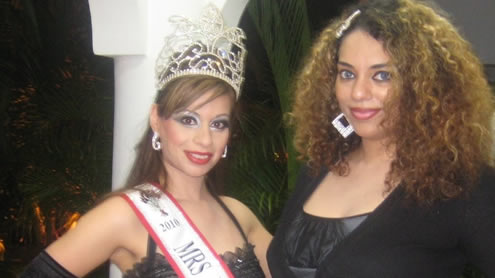 Tahmena Bokhari, Mrs.Pakistan World 2010 has made history. On Saturday November 13th in Negril, Jamaica, Bokhari was crowned Mrs. United Nations 2010. She competed with married women around the world with strong representation from Columbia, Nigeria, West Africa, South Africa among others. In the history of the pageant industry, this is the first time Pakistan has won an international pageant title.

Upon winning Bokhari stated, “I would like to thank all of those who have supported me and have worked with me to improve the image of Pakistan in the world. Being the first international title holder for Pakistan is not my victory alone and nor am I solely responsible for this win. It is because of you out there, all of my family, friends, fans, and all those who have dared to dream this new vision of Pakistan along with me. This is a victory for all Pakistanis everywhere.”

Bokhari opened the evening with a bang after coming in the top 5 winner’s circle for talent earlier in the week. Her sensational dance routine represented the emotions of a woman to a compilation of music from Nusrat Fateh Ali Khan as well as a bit of music from around the world. Bokhari was the first delegate to come out in her national costume made from local Pakistani fabric in green and white for the Pakistani flag.

Delegates were judged on poise, grace, intellect, diplomacy, passion and commitment to community service along with several other areas.

Along with the organizers of Mrs. Pakistan World, Bokhari landed in Jamaica on the 8th and spent a week with the dozens of delegates from other countries. During their week, the delegates visited local schools, charities and mingled with fans. Due to her grace, charm, personality and style of dress, Bokhari was said to be an instant favorite. Other winners of the night included Miss Canada as Miss United Nations and Miss Teen Jamaica as Miss Teen United Nations.

In January of 2010, Bokhari won Mrs. Pakistan World 2010 in Toronto, ON, Canada. She has 15 years experience in social work and is a college professor in the Greater Toronto Area. She is passionate about working towards a lighter and more positive image of Pakistan in the world and enhancing the status of Pakistani women. Bokhari stated, “I hope to inspire all women to dream big and I want to show the world that only because of the mere dream of a new Pakistan was I able to help make history for my country.”

Pakistan knows what we want: Top US officer