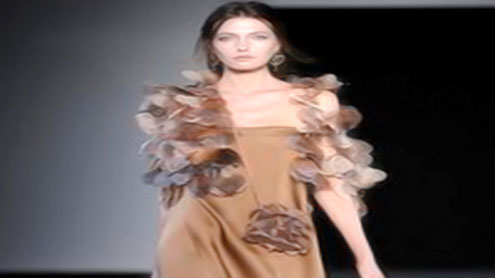 Milan: “Water is a Right for Everyone,” read the inscription of the white Hanes T-Shirts Giorgio Armani left on each seat at his latest show, announcing the designer’s latest global engagement.Unveiling his fall 2011 collection in Milan on Monday, Feb. 28, Armani opened with a Caribbean blue Jacques Cousteau style ad with Facebook link. Post-show the designer explained his commitment to provide 100 liters of drinking water for children every time someone buys one of his Acqua di Giorgio or Acqua di Gioia scents.”Water is the basis of everything. Without it, well, we couldn’t live. It’s our duty to guarantee that to every human being,” explained Armani.Armani may be 76 years old but he keeps plugging new ideas into his repertoire, especially with this show. It featured lots of new tailoring, particularly cutaway mannish double breasted jackets that were strict enough to provide a lovely line, and fluid enough to forgive a less than ideal figure. One, buttoned up the back, looked very hard to put on, but was nonetheless a sensational image. Paired with flared trousers that ended above the ankle, it was a very fresh take on Armani’s own signature style.His show also confirmed the triumphant return of the maxi coat, especially as the show opened with a stunning herringbone version.

The designer’s other big idea was a risk-taking pear shaped silhouette, though he was not the only designer in Milan to riff on that theme. In lesser hands these could have looked very ungainly, but the Italian master knows how to cut great fluid shapes, sinuous lines that recalled the very watery images that opened this intriguing show.Made in unlikely combinations of pewter, brown and an eye popping mix of pinks – powdery, rosy petal and iridescent – in a subtle blend for a subtle take on contemporary fashion – Yahoonews