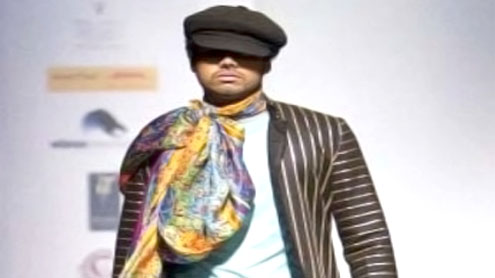 Four Pakistani fashion models for the first time in history became the part of extravagant fashion celebrations, Colombo Fashion Week 2011, which kicked off last week at the grand ballroom of the Colombo Hilton.While designers like Rizwan Beyg stole the show when he displayed his breathtaking collection. the models also enthralled the audience with their elegance and poise.

The four models that went on to participate in Colombo Fashion Week 2011 were Arsalan Javed, Muhammad Ali Gill, Fayeza Ansari and Nadia Ali.Arsalan Javed is the first model in the history of the Pakistani fashion industry to have debuted at the Colombo Fashion Week 2011. Ali Gill is another newcomer to the industry as has only done three shows within native bounds before making it to an international forum.On the other hand, Fayeza Ansari is among the top ranking models of Pakistan, who also stole the show at the Colombo Fashion Week with her outstanding walk and poise. Nadia Ali may not have been as experienced as Fayeza Ansari; she made her entry into the field four years ago and has been known for her fabulous posture. The model was recently praised by Chief Organizer of the event, Prasad Bidapa, as having the “the greatest walk on the ramp” – Dailymailnews