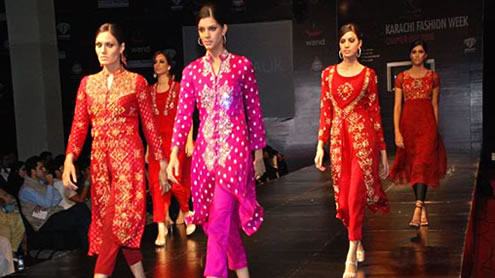 It can’t be said that the attendees of Karachi Fashion Week had fallen into the groove of the event on its second day. The hour long starting delay and rocky start by “Zara” with foiling, tie-dye and Guess Co. on one of the shirts…The day ahead was going to be long indeed.The lackluster first half wrapped up rather uneventfully. The second half gave us Nadya Mistry and Rizwanullah and the seats managed to fill up. While the first day left everything to be desired, the second day made ears perk up at the name of the finale designer, Rizwanullah. The young man has the edge to bring the crowd in and take hold of their seats. What he will do, nobody knows. Though we did take some guesses. The designer met with some resistance at this year’s PFDC Sunsilk Fashion Week. Rizwanullah wanted to send out very risqué items onto the ramp. Senior designers and PFDC management cautioned him against the career suicide that he was about to commit and the fact that conservative Pakistani society would not approve of the revealing clothes which some had branded as down-right vulgar.

Taking his chance with KFW has seen the designer playing his cards very cleverly. The Absolute Intoxication collection has more than made up for Rizwanullah’s last fashion week collection. The designer did show a similar collection at the Veet Show this year when he designed for the Ms Veet Supermodel segment. The same style of pastel embroidery on black was seen here but more pieces were added and most had been reworked. The stand out pieces included a jumpsuit with a crop vest, very Pakhtun. A lace dress with lace leggings was another innovative creation from a designer who everyone knows can deliver. The menswear was also brilliantly made with shalwar kurtas and jackets.Rizwanullah might have been given creative free reign to unleash himself, yet took moderation into account. He sent out one item which added fun to the evening; a black pair of briefs with gold trim.

Yes it was underwear but no one seemed to mind. Is it the fashion council platform that makes one judge a designer or a designer’s collection? The headstrong Rizwanullah goes against the grain and his rebellious ways may serve him ill, but his talent is what will help him survive.Nadya Mistry was another known designer. She manages to show up on the radar just when her sun has set in the fashion horizon of our minds. Mistry paid homage to Amy Winehouse, the singing sensation who lost her life at the all too young age of 27. Mistry sent out a black and white polka dot ensemble to open her show and the guitar strutting Nadya Hussain opened the collection with a bang. The palette was black, white and blue and while some of the outfits worked, others fell flat. The tribute by Mistry may have been all too literal with the young singer’s face on too many of the pieces; a pant leg and a dress. A black and blue dress and a few of the shirts showed us the designer’s potential but it all went south when the bridal pieces came out. Read this with me now, slowly. Amy Winehouse. Desi bridals. What could have been a collection to win over everyone was blinged to death. Winehouse never did gaudy shine and shimmer. She should have done away with the bridals completely. Mistry could have taken inspiration from the same decade as the singer did, the ’50s! The colours, the cuts and the general feel of the ’50s is strong enough to evoke so many emotions and shown through the lens of a tortured singing genius could have brought Mistry back in huge way. Just the beehive hair and the mile long eyeliner were not enough to channel Winehouse’s spirit.

Make-up was done by Mona J Salon and the slight changes in make-up and styling were suited to various collections. Peng’s Salon did the men’s grooming on the first day, making the models seem like they had bad tans. Mona J’s plaited hair style for the first half of the day was first seen in Elie Saab’s couture show.  If designers can be called out for copying fashion, so can and should stylists.Karachi Fashion Week is giving us an opportunity to change our view of what a council is and should be doing. The chance to show at a fashion week is important for any designer trying to set foot into the crowded doorway of the big bad fashion world. It’s that wait the fashion community endures at grueling fashion weeks, for a veteran designer to do something out of their comfort zone or a new designer to give us hope that one counts on fashion weeks and its councils for.