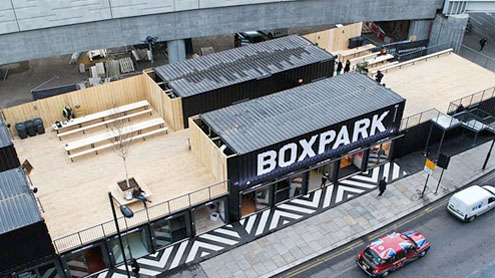 A pop-up mall has opened in London, with plans to open a European version next year.

BOXPARK, which claims to be the first pop-up mall in the globe, opened in the British capital’s Shoreditch neighborhood Saturday, November 3.It brings together independent streetwear labels including Abuze and Boxfresh as well as sports brands such as Nike, Puma and Lacoste L!ve.The mall, which is home to over 60 labels, features basic building blocks which can be moved to anywhere in the globe – although there are plans to stay at the Shoreditch location for five years.

There are plans for a second London site, two regional UK sites and a European pop-up mall by the end of 2013. Fashion news publication Drapers reports that Dutch capital Amsterdam is a likely contender for the European location towards the end of 2012.This new mall comes as stores are increasingly looking to find more innovative ways to attract consumers. From high-end designers to high-street stores, it seems as though nowadays more and more companies are jumping on to the pop-up bandwagon in a bid to create buzz.

Just last week French fashion house Christian Dior opened its very first pop-up shop in Miami for the Art Basel show, paying homage to its collaboration with artist Anselm Reyle on a collection of leather goods, accessories and makeup.Meanwhile, online auction site eBay has also been experimenting with the trend in the run-up to the Christmas season, launching virtual pop-up stores in the US and UK where customers can browse items in store before scanning codes and being taken to the product’s eBay webpage. – Yahoonews