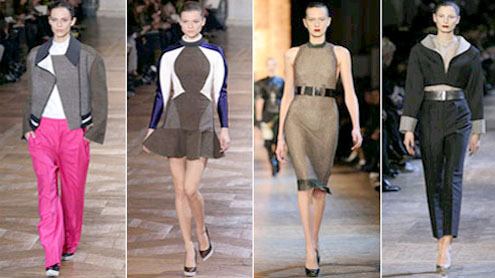 Stefano Pilati, who exited the Paris fashion week stage on Monday after a swansong show that brought 10 years designing for Yves Saint Laurent to a close, summed up better than anyone the almost insurmountable challenge of the job which he leaves tantalising vacant.

“Saint Laurent is maybe the most complex brand in the fashion system,” he said recently. “Because you have to face people’s imagination, which is infinite, just as infinite as Yves’s work was.” Following in the footsteps of a fashion legend who brought the influences of vintage, menswear and streetstyle onto the Paris catwalks was not easy. “Saint Laurent did everything,” Pilati told the New York Times six years ago. “You go to the archives and you feel he thought of any idea I could ever imagine. It’s intimidating.”

Before his death in 2008, Yves Saint Laurent said of Pilati that “some of what he does is good, some of it is not so good”. It was a subtly damning indictment, in an industry where anything less than hyperbole is faint praise indeed. Pilati is well liked and respected in the fashion industry, but his tenure at Yves Saint Laurent, while by no means a disaster, is likely to be remembered as falling short of triumphant.

Pilati’s departure was announced in a coolly polite notice from YSL headquarters, thanking him for being “instrumental in the rebuilding and repositioning of an iconic French luxury brand. Under Stefano’s guiding vision and artistic direction, the house has become a contemporary reference in high fashion”. YSL owners Gucci Group have material reason to be pleased with Pilati’s tenure which, thanks in part to commercial successes such as the Muse handbag and the Tribute shoe, saw the YSL label turn from loss-making to profit.

In contrast to the emotional final bow of Raf Simons, who made a teary appearance on the Milan catwalk last week after being dismissed from Jil Sander, Pilati was composed and smiling as he showed his collection of uncompromisingly hard-edged chic, with chainmail dresses and narrow silhouettes. Persistent rumours that cult menswear designer Hedi Slimane will be Pilati’s successor are as yet unconfirmed.

A fortnight after a cameo appearance at London fashion week, Stella McCartney was back in her usual slot on the Paris schedule to present her autumn 2012 line, which drew fabrics from an English country house wardrobe and cut them into the sports-influenced silhouette of modern city dressing.

A sensible tweed coat in soft, heathery tones was updated with a blue-and-white ribbed collar of the type found on baseball jackets, and felted Aran-stitch sweater dresses and skirt suits were moulded into an exaggerated hourglass shape at the hips – a wintry take on McCartney’s ever-popular hourglass-shaped cocktail dresses. The singer Alicia Keys became the latest celebrity to showcase what has become a signature look for the designer, wearing a trompe l’oeil hourglass dress in the front row.

“The language of sport is always part of my look,” said McCartney, rolling her eyes at suggestions of a direct link with this summer’s Olympics. But the sports influence, always present in a McCartney show, was noticeably more front-and-centre than in recent seasons. Turtleneck sweaters had wetsuit-style panels around the torso and heavy-duty plastic zips to the nape, while all the models – and the designer herself – wore their hair in gymnasts’ buns.