Opening Ceremony is coming to London 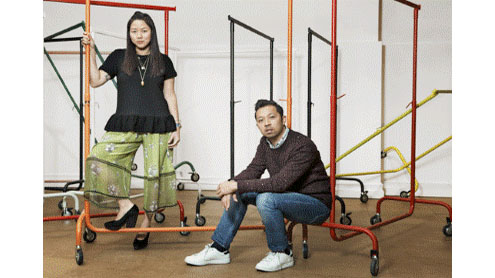 Opening a pop-up shop in Covent Garden’s King Street shortly before the Olympics Games, the Manhattan-based retailer will be moving into a permanent space just down the road later in the autumn.

Carol Lim and Humberto Leon’s favourite places in the world.”Bringing Opening Ceremony to Covent Garden is an important next step in the growth of our company,” the retailer’s founders Humberto Leon and Carol Lim, told WWD . “In the last 10 years since we first opened our doors on Howard Street in New York, Opening Ceremony has expanded to Los Angeles and Tokyo, but we have had our hearts set on London since the beginning. Covent Garden is an historic, global shopping destination and we’re looking forward to what Opening Ceremony will add to its exciting future.”

The feeling is certainly reciprocated. Having until now been limited to accessing Opening Ceremony through limited UK stockists or expensive overseas shipping, the English shopper will celebrate the arrival of one of the most exciting retailers around, gaining instant access to their myriad of collaborative collections with style icon Chloe Sevigny and brands such as Pendleton, Nike and Rodarte to name just a few, not to mention their own ready-to-wear and accessories line.

The Sartorial Network: Opening Ceremony founders Carol Lim and Humberto Leon on their new role at Kenzo.In celebration of the Olympic Games, from which they took their name, Opening Ceremony will also be releasing a collection of unique pieces by Proenza Schouler, Chloe Sevigny and Pamela Love amongst others, as well as a sportswear-inspired line with high street leaders Topshop, which will move into Topshop stores shortly afterwards. Their newest collaboration, Adidas x Opening Ceremony, will also launch at the same time as the pop-up store. – Telegraph

Bordeaux wine: is it worth the money?

Bordeaux wine: is it worth the money?