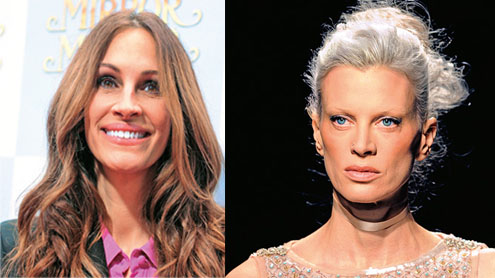 Is old the new young? Designers and filmmakers seem to think so with more mature vintage all over the catwalk and in the movies.

But what’s behind the resurgence of the older women? Nostalgia, the recession, or just plain, old-fashioned pragmatism?It started  with a school uniform. Ever since Britney donned that white shirt for the Hit Me Baby One More Time video, extreme youth has had pop culture in a chokehold. And for more than a decade, we lived with an increasingly childlike ideal of female beauty: Cheryl Cole’s liquid eyes, Keira Knightley’s unformed figure, Lara Stone’s gaptoothed smile.

Middle-aged women, in the meanwhile, have got used to feeling invisible. But in the last two years, the landscape has shifted. Women of a certain age have started moving slowly, seamlessly, into the spotlight. The big surprise? They are taking centre stage in the most ageist arenas of all: film and fashion.

And what about the recent spate of juicy film roles for 40-plus femmes? Meryl Streep’s spirited, sexy turn in It’s Complicated, where she tempts errant ex Alec Baldwin back from his 30-something trophy wife; Sigourney Weaver in Cedar Rapids, embarking on an affair with an ex-pupil 30 years her junior; Julianne Moore, ensnaring a beautiful callgirl half her age in Chloe?

Not too long ago, if middle-aged actresses wanted to carry on working, they had to resign themselves to playing crones and mothers-in-law for the rest of their careers. But a cursory look at the cover girls tells a very different story: Halle Berry for Vogue, Julia Roberts for US Elle, and Jennifer Aniston for Harper’s Bazaar.Still opening films, still looking fierce as-you-like. But not one of them will see 40 again.

Innocence and experience
Fashion photographer Marguerite Oelofse thinks our newfound love of older women is merely a case of nostalgia. Fashion’s currently locked in a love affair with all things ’90s, so why not make use of the Amazonian originals who still look better than almost anyone else in the designs of the decade?

“Girls like Stephanie Seymour, Linda Evangelista and Claudia Schiffer carry so much history. And older women bring a huge amount of sexuality and elegance to a picture. It’s hard to shoot a model with no experience.”Fashion writer Tamara Rothbart also feels that the untouched look of extreme youth is no match for the magnetism maturity brings: “For years, we’ve opted for a blank, homogenous, crease-free brand of beauty. But a 20-year-old can’t come close to a woman who’s still beautiful but has the experience of age.”

And aside from the practical benefits of directing a woman who’s loved, lost and cried at Grand Central Station at three in morning, there’s also the emotional connection we’ve got with these familiar faces: “It’s a new decade, and we have no clue how it’s going to turn out,” says Oelofse. “We’re feeling very uncertain about the next 10 years, so it’s nice to revisit the late ’80s and the ’90s.”

Rest assured
Here, she echoes Rothbart, who reckons the sudden resurgence of the Supers is down to consumers seeking assurance in ‘safe’ brands. “It’s about having longevity in a consumable market. It’s reassuring to see the way these icons have lasted.”Since the economic downturn, the world has shown itself to be a scary place. It’s only to be expected that we’ve been sent scuttling back to icons of another, better age. But it’s not just the fact that we know and love these women. There’s a deeper, more atavistic instinct behind our choices.

A study by Coastal Carolina University found that movie stars with older-looking features (small eyes, narrow faces, long chins) are more popular. Why? Because when times get rough, we tend to look for able-bodied broads who can help keep the boat afloat, not baby-faced passengers.Then factor in the  confidence with which older women approach clothes. Ari Cohen, whose blog Advanced Style (a sort of Sartorialist for the over-60s) says style is something that definitely improves with age: “As you get older, you have less to prove and can dress for yourself. Even if style is instinctual, it’s a process of trial and error. So it will improve with experience.”

And of course, there’s a hefty dose of pragmatism at play. Francisco Costa, creative director of Calvin Klein, acknowledged this when talking to the press about casting McMenamy in their show: “I wanted a cast that represented a customer I design for. We wanted to acknowledge women who have always worn our clothes.”

Older women wield greater spending power. But if consumers are  going to keep handing over their hard-earned cash, they want real,  wearable clothes. Fashion’s new watchword  is ‘believability’, and  peddling fantasies now feels like a relic from a bygone age.Women know they’ll never look 16 again. What they want is to be able to aspire to the images up on those billboards. – Kahleejtimes