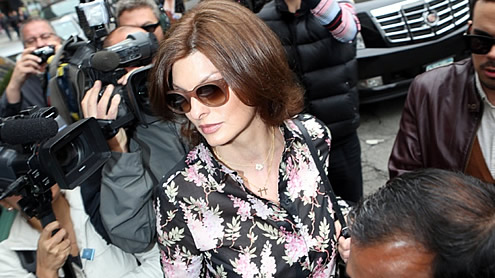 NEW YORK – When supermodel Linda Evangelista told French billionaire Francois-Henri Pinault in 2006 she was pregnant with his child, he asked her to get an abortion, her attorney charged Thursday on the first day of a child-support trial in Manhattan.

Pinault, 49, who is currently married to actress Salma Hayek, denied that charge but testified he told Evangelista that “if she were to have a child (they) might not have a relationship.” With that a four-month relationship, in which he said the couple only actually saw each other seven days, came to an end. “I didn’t even know her very much,” Pinault said during an acrimonious afternoon hearing. The case drew widespread attention last year after it was reported Evangelista was seeking as much as $46,000 a month in child support.

Her attorney William Beslow said that figure was inaccurate, while acknowledging that the unspecified sum she would be seeking is “substantial.” Beslow contends Pinault is worth more than $3 billion. Pinault’s attorney, David Aronson, calculated that Evangelista’s annual income averaged $1.8 million for the four years leading up to her filing for support in 2010. “Is Mr. Pinault a comfortable person of substantial means?” Aronson asked in opening arguments. “The answer is yes. But Ms. Evangelista is also a person of substantial means.” Evangelista, 46, gave birth to a son, Augustin, now 5, and supported him for the first several years of his life. She decided to take Pinault to court after private child-support negotiations failed and her multi-year contract as a spokesmodel for L’Oreal Paris cosmetics ended in 2010, Beslow said.

One of the modeling world’s most recognizable faces, Evangelista arrived about 15 minutes late to court wearing a black skirt, a floral-patterned blouse, beige stiletto pumps and a grim expression. She barely glanced at Pinault as the trial got underway. During opening arguments, both lawyers sought to portray their clients as victims of each other’s public relations smear campaigns. Pinault testified he first received a child support request from Evangelista in 2007. “I asked, ‘What do you have in mind?’, he said. “I received a demand. It was not reasonable, I made a counterproposal.” He said the next time he heard from Evangelista was 2010, when she filed the support case.

Augustin is Evangelista’s only child. Pinault has two children from a previous marriage, and a third child by Hayek. The trial is expected to last several days, after which a surrogate judge will decide on the amount of child support due to Evangelista. Either side may appeal that ruling to a family court judge. – Yahoonews

‘The Avengers’ for those who don’t read comic books