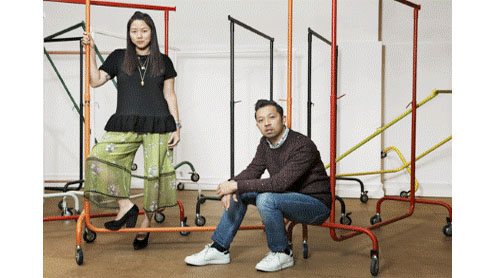 Opening Ceremony is launching a fashion magazine this August, called OC Annual, with the specialty store aiming for it to become a “collectible publication for a new generation.”

The on-trend store, which has locations in New York, Tokyo and Los Angeles, is feting its 10th anniversary this year, and founders Humberto Leon and Carol Lim hope to follow in the footsteps of iconic fashion publications such as high street store Benetton’s Colors magazine.

“As magazine fanatics, O.C. founder Humberto Leon and myself are aiming to create a collectible publication for a new generation, something beautiful and special in the vein of Benetton’s ‘Colors,’ Comme des Garçons’ ‘Six’ and Joe McKenna’s ‘Joe.’,” wrote Lim in an internal memo obtained by WWD.”We want to make a magazine that will appeal to kids in Nebraska as much as industry people.”

With major fashion photographers including Bruce Weber, Walter Pfeiffer, Todd Cole and Tim Barber already lined up, each issue of the collectible fashion and culture magazine will have a particular theme, with the debut edition to focus on sport in honor of the upcoming London Olympics.The Olympics is also the theme of US Vogue’s June issue, which features soccer star Hope Solo, tennis player Serena Williams and swimmer Ryan Lochte on the Annie Leibovitz-shot cover. – Yhoonews

Obama: ‘Americans are on our side’ on same-sex marriage