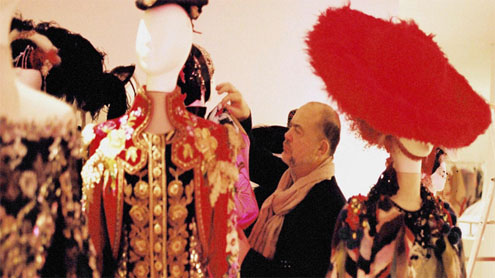 A new exhibit presenting the work of French couturier Christian Lacroix will open in June, focused around his costume designs for a ballet staged last autumn in Paris.

The exhibition, held in a museum devoted entirely to the world of stage costumes and sets — the CNCS (Centre national du costume de scène et de la scénographie) in the town of Moulins, France — lets visitors see the costumes designed by Lacroix for La Source, presented last year in Paris. In addition to presenting the actual costumes in the context of the stage performance, the exhibition traces the process behind their creation — from the drawing and maquette stage through the labor-intensive fabrication in the costume workshops to the end result put on stage.

A central part of the exhibition is based around the costumes of Djemil and Nouredda, the two main characters of the ballet. The story’s fantasy world with hints of orientalism and folk culture required the designer to work in a wide range of styles and materials including tutus in Japanese organza, tunics and loose pants made from vintage saris, ethnic dresses and accessories adorned with Swarovski crystal.

The exhibition, which opens June 16 and runs through December 31, will also reveal Lacroix’s various sources of inspiration including documents, photos and historical designs, as well as present all the sketches he created for the cast’s costumes. – Yahoonews