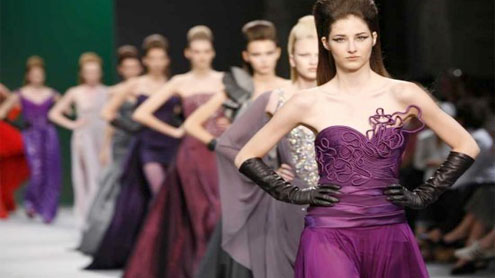 Raf Simons hopes his Christian Dior haute couture debut is more ‘dynamic’ than what has gone before.

The designer was unveiled as the label’s new artistic director in April and made his debut on the runway at Paris Haute Couture Fashion Week yesterday afternoon.There was intense speculation about how Raf’s minimalist aesthetic would fit in with the fashion house, which is renowned for being flamboyant. His blend of simple tuxedos and peplum gowns went down a storm with critics and Raf is thrilled.

‘I’ve been very much involved with the period that Christian Dior defined, 1947 to 1957, and it seemed to me very normal to jump into it and work with that, to work with the archive and see how it can be modernised. And also to change the psychology of people who are interested in couture,’ he explained to style.com. ‘The way I’ve been looking at it so far is as a still image, something you look at for that moment. I think lots of people see it as a still, an image from the red carpet. I want to make it more dynamic, appeal to a person who has a different energy. A younger person, in mind, not necessarily in age.’

Raf believes couture should be unique and offer fashionable women something new. He also wants people to see how much work has gone into his pieces – as well as the couture designs by other fashion houses.The designer put his own spin on the Dior aesthetic by taking typical shapes from the label’s archive and updating them, even using colours which aren’t usually seen on the house’s runway – such as bright yellow and blue.’It’s mind-blowing when you start investigating what is done here. But I want to approach it with a new energy. I’m interested to see how people will pick up on it,’ he added. – MSN

32nd IEE to be held in Karachi, Lahore