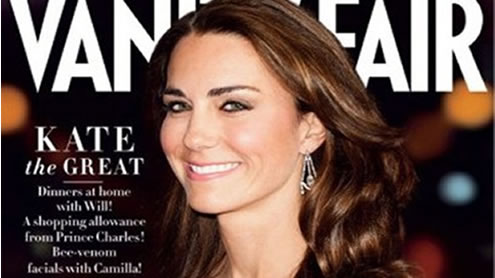 The Duchess of Cambridge has been voted one of Vanity Fair ‘s most stylish stars of 2012. Quelle surprise! Or not: she made the glossy’s Best-Dressed List last year, and in 2008, when she was plain old Kate Middleton.

Still, it’s impressive, given that she once turned up to a roller disco in a green sequinned halter-neck and yellow hot pants. Now she’s cutting a dash in Christopher Kane and Roksanda Ilincic at the Olympics . “Kate the Great!” declares Vanity Fair on its September cover starring the Duchess. Others repping Team Fashion GB on the list include Stella McCartney and Poppy Delevingne for the ladies. For the men, Prince Harry, Eddie Redmayne, Richard E Grant and Ozwald Boateng have made it, while Colin and Livia Firth have the accolade of being a best-dressed couple.

What exactly does it take to make The List, I hear you cry? Vanity Fair suggests that “for those wishing to emulate the international cream of 2012’s fashionable crop, two unexpected words: vintage and grandparents!” So there you go folks: you have to wear vintage – or your grandparents. Let’s take a look at the more traditional ways of making the cut:

This is where the Fan Bing Bings and Diane Krugers come in, girls who consistently manage to rock outfits that would look bloody stupid on anyone else, say, like a taxidermied turkey turban. Or something.

Whoever said money can’t buy style was a liar. A liar and a pauper. Give us a spare million or five and, post-Céline splurge, see if we don’t make the list.

Lady Gaga, who has just tweeted a picture of her sitting in an armchair naked, is in absentia , after being hailed “a fashion original” last year. Gaga, love, it’s called the Best-Dressed List for a reason.-Telegraph