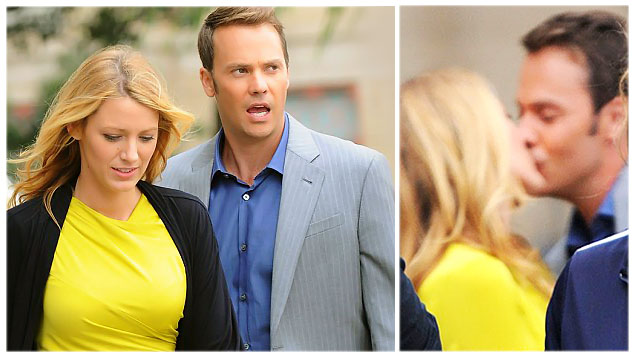 Newlywed Blake Lively enjoyed a nice romantic kiss in New York on Thursday – but it wasn’t with her husband. The actress, 25, was pictured locking lips with a co-star Barry Watson while filming Gossip Girl in Long Island.

The handsome former 7th Heaven star has joined the cast to play her character Serena Celia van der Woodsen’s love interest for the sixth and final season. Blake was wearing a bright stylish top and presumably being filmed from the waist up as she had tracksuit pants and Ugg boots on the bottom. She was earlier seen on set in a maroon shirt, embroidery top, cardigan and her favourite comfy footwear.

The star today found herself at the centre of baby talk following rumours she’s expecting her first child.

The New York Post were the first to report the rumours, quoting a source as saying: ‘Blake is usually really careful about what she eats, but since her wedding, she seems to be eating a lot more. Everyone on set is on bump-watch,’ Other sources said the 25-year-old is ‘glowing’. But her spokesperson was quick to dismiss the speculation, branding the claim ‘completely untrue’.

The actress and Ryan Reynolds, 35, who had not announced an engagement, married in a surprise ceremony in South Carolina on September 9. They have yet to talk publicly about the wedding, although Blake has been spotted wearing a huge diamond engagement ring and matching wedding band, said to be worth $2 million. Lively wore custom Marchesa ball gown for her big day, pairing the embroidered silk tulle creation with Christian Louboutin shoes.

After saying their vows at the historic Boone Hall Plantation, with a promise to ‘support and love each other and to make each other laugh,’ the couple exchanged rings by celebrity jeweler Lorraine Schwartz. – dailymail.co.uk