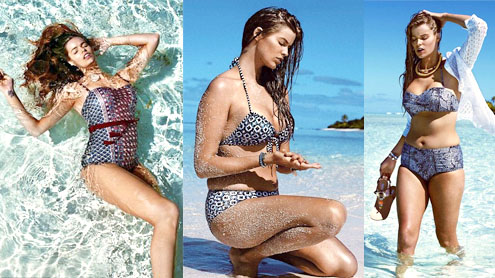 Winter is slowly encroaching on the U.S., but model Robyn Lawley has made one last stand for summer in a stunning new swimwear shoot.

The 23-year-old size 12 model took to the Cook Islands’ Aitutaki Lagoon to model printed bikinis for Cosmopolitan Australia’s November issue.After landing a major contract as the first ‘plus-size’ model for Ralph Lauren last month, the 6ft 2in beauty shows off her now famous curves, defying ideals that thinness equals beauty.Recently those curves have also been featured on the cover of Vogue Italia, French Elle and as the face of Boux Avenue lingerie.

And in photographer Steven Chee’s sun-drenched images for Cosmopolitan, Miss Lawley is refreshingly portrayed as an everyday model – the words ‘swimwear for plus-size girls’ nowhere to be seen on the magazine’s pages.Cosmopolitan’s Fashion Director, Nicole Adolphe, said: ‘Robyn totally embodies what a real woman is, and our readers adore her – so I HAD to shoot her for our special swim issue. And what a shoot, she simply oozes sexuality and is the ultimate Cosmo girl.’Despite being profiled on other magazine covers with captions that read ‘The model who likes her food,’ the Australian-born model says she is slowly making size irrelevant.

‘I’ve given up caring what people think,’ she told People magazine recently.’I tell tall girls, being tall and curvy is the double whammy! But confidence is really sexy. I love my shape. I love my body. I’ve come a long way.’Twenty years ago the average fashion model weighed eight per cent less than the average woman; today, she weighs 23per cent less.’I’m big boned,’ she said on Good Morning America last month.

‘I used to be told to lose weight and exercise all the time. I got a huge amount of pressure to diet. And my body, it was such a battle for me to do that because I’m tall and I’m broad. I really struggled to maintain that size.’Despite the fact that 50per cent of women wear a size 14 or larger, most designers only cater to sizes 14 or smaller, and Miss Lawlely hopes to be the catalyst to change that.She said: ‘I genuinely want companies to take notice and start being more realistic about who their customer really is. I hope to keep breaking down those barriers.’ – Dailymail