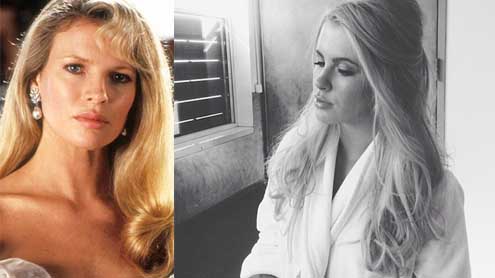 Ireland Baldwin is putting her good genes to use with the help of her mother.The 17-year-old – who just landed herself a top modelling contract – has been getting tips from her model turned iconic actress mother Kim Basinger.

The daughter of Alex Baldwin is hoping she will be able to replicate her mother’s career thanks to their shared good looks.She told People.com she is working hard towards her goal of becoming a top model: ‘I’m getting into it. Doing it right. I want to know where it’s going to take me.’Ireland said she was inspired by a number of contemporary models including Kate Moss and Miranda Kerr, but of course also also looks up to her mother Kim.

‘Oh! And my mom, of course,’ she told People.’My mom’s very happy she can finally give me tips. She’s always there, so she’ll stand in the back and say, ”Turn your head this way, or do this.At 6′ 2″ blonde beauty certainly has the height to be a model and at a shoot on Tuesday she proved not only can take tips from her mother – she can also channel her.

The teen posted a picture of herself at a New York fashion shoot. Although just a candid picture, Ireland looked just like her mother in Kim’s early photo shoots.But it was not just her mother that Ireland channels when she is modelling.On Tuesday, thanks to a Sixties inspired beehive hair style, the 17-year-old appeared the splitting imaged of film icon  Brigitte Bardot.Last month Ireland was signed by IMG models and has been working solidly ever since.The blonde beauty announced the news on Twitter: ‘Officially working for @TwoManagement and @IMGmodels! I’m blessed, happy, and ready to WEEEEERK.’ – DailyMail