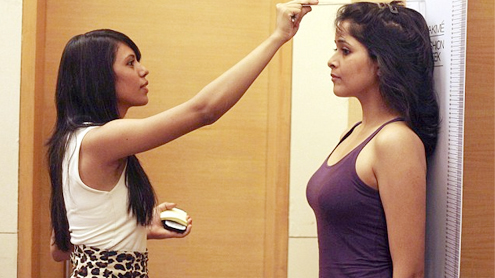 Nervously clutching their upper arms as they wait for their turn to impress the judges, these are some of the 86 would-be models hoping to appear at Mumbai’s Lakme Fashion Week next month. Only seven girls are chosen and as a result, competition is fierce.

Although Lakme Fashion Week regularly attracts big name models, including Naomi Cambell, who appeared on the runway during the inaugural event in 1999, and Indian superstars, Candice Pinto, Alecia Raut and Surelee Joseph, fresh faces are auditioned a month before the show.

Hopefuls are asked to strut their stuff on the catwalk in front of a panel of judges and are measured to see whether they have catwalk proportions.Generally, models need to be at least 5ft 8″ tall, with measurements no larger than a 34″ back, a 26″ waist and 35″ hips.Those who do make the grade will join the likes of Pinto, Raut and Campbell on the catwalk during the event, which runs from the 23rd to the 27th August.India’s largest – and most prestigious – fashion event, LFW as its locally known, attracts the sub-continent’s hottest designer names as well as a front row studded with Bollywood stars.

Among the names expected to show their creative offerings on the catwalk are Rohit Bal, a flamboyant sequin specialist who has created pieces for Uma Thurman and Pamela Anderson among others, and Manish Malhotra – Indian high society’s go-to guy for bridal wear.Others set to appear include the award-winning designer Ken Fernandes, craft specialist Nitya Arora, and Bollywood favourite Rocky S.

International labels that have staged shows during the Mumbai event include Dolce & Gabbana, Louis Vuitton and Roberto Cavalli.Although focus is usually on the clothes, Lakme Fashion Week isn’t without its controversies, most notably when Bollywood hero, Akshay Kumar, was arrested for breaking India’s strict obscenity laws during a 2009 show.The star’s wife, Twinkle Khanna, unzipped his trousers as he strutted his stuff on the catwalk – much to the displeasure of the Indian authorities. – DailyMail