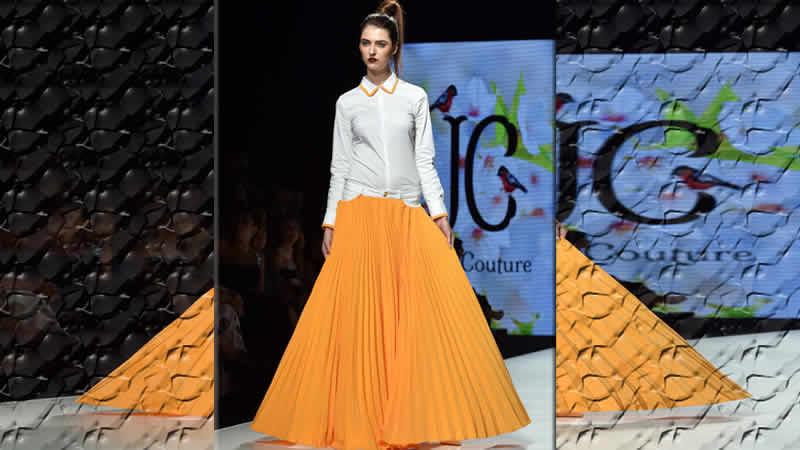 They were the work of Suzan Farhoud and her daughter Leen al-Shieshakly, who set up their ‘Jeans Couture’ brand just a year ago, hoping to share their passion for denim.

From a mother and daughter duo hooked on denim to an art-inspired fashionista, female designers from ultra-conservative Saudi Arabia stole the limelight at Arab Fashion Week 2016 in Dubai. Models strutted the catwalk on Saturday in mini-dresses, cropped jackets, skin-tight jeans and flamboyantly embroidered transparent blouses. They were the work of Suzan Farhoud and her daughter Leen al-Shieshakly, who set up their “Jeans Couture” brand just a year ago, hoping to share their passion for denim. Farhoud designs the clothes, while Shieshakly creates bags and manages the business. We wanted the Saudis not to look at denim in a casual way,” Shieshakly said, but also to “wear it for a formal event”.

We wanted to get the denim into the Saudi market as well as the Middle East,” said the US-educated 26-year-old, who wore her dark hair in a short bob. Their collection, named “Out of the Garden”, mixes the fabric with almost everything. They have created denim tops, trousers, jackets, and dresses – many covered with colourful light flowing capes or skirts. “I always loved jeans,” said Farhoud, who wore a long dress that mixed a denim top with a light flowery skirt and sleeves. “I always thought of garments with jeans that I wouldn’t find anywhere.” Farhoud said having a German mother had influenced her designs. Since I am half Arab and half Western I wanted to mix modern and elegant,” she said. They say their creations have been well-received in Saudi Arabia, where women are forced to cover up from head-to-toe in public. Asked if breaking social barriers is among her aims, Shieshakly said, “totally”.

I want the people to wear our clothes, to be very independent women that have freedom of expression,” she said in English. “That’s very important to me.” Their casual designs contrasted with those of another Saudi designer, Arwa al-Ammari, whose style mixes luxury with elegance and art. Her models drew everyone’s gaze as they walked down the catwalk in dresses, coats, skirts and tops of structured, layered fabric. Elegant enough for an English tea party, her designs were decorated with leaves, flowers, and even big birds. I loved arts, so I by Source 1″ href=”#72297317″> started a fashion line inspired by art,” she told reporters of her ArAm brand, which launched in 2013. “This collection was inspired by tropical nature – the colours and figures such as the birds and flowers (and) even iguanas,” said the British-educated designer. She wore a sumptuous pink and purple skirt and a white structured top, her bright blue eyeliner matching her nail polish.

A colourful fish-shaped brooch with feathers completed the look. Ammari said she used various fabrics including lace, the complex weaves of jacquard and super-fine tulle. Ammari, who covers her hair with an elegant turban, designs on conservative lines, combining long skirts with full-length sleeves. When I create a design I keep in mind that I should be international while at the same time do something suitable for the region,” she said. “I am conservative in my clothing. Even in private events I prefer long sleeves as I feel they are more elegant.” Caroline Rush, chief executive of the British Fashion Council, said she believes conservative designs are gaining traction in the West. I think that modest fashion is certainly something that is growing in the Western world,” she told reporters. She described the Saudi designers’ collections as “very different in terms of style but very open”. The soft power around the creative industry and particularly fashion does have a very powerful message in terms of showing how cultures are changing,” she said. “(Fashion) is a fantastic way to be able to show that.”

The Karachi Kings – Gearing Up For PSL Season 2

The Karachi Kings – Gearing Up For PSL Season 2