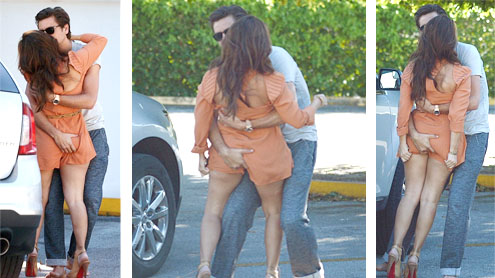 Many may have thought that he would have been in the dog house following his raucous time in Las Vegas for Halloween over the weekend.

But Kourtney Kardashian appeared more enamoured with partner Scott Disick than ever in Miami on Monday.Perhaps it was the fact that the couple had taken delivery of a brand new Ferrari.Scott was spotted grabbing Kourtney’s bottom as the pair embraced in the street.Squeezing her hard on the rear, he also passionately kissed her on the lips.

And no wonder he couldn’t keep his hands off his ladylove, as the reality star looked stunning in a pumpkin-coloured romper, which displayed her enviable curves.The brunette beauty paired the ensemble with racy tan lace-up Christian Louboutin stilettos and cinched her ensemble in at the waist with a snakeskin belt.Meanwhile, Scott went barefoot in the car park, wearing a pair of grey flecked tracksuit pants and a light-grey T-shirt.

He also wore a pair of sunglasses, which hid some no doubt heavy bags under his eyes following his wild weekend in Sin City.The couple, who already took receivership of a Phantom Rolls Royce earlier this month, beamed as they checked out their new sporty ride.Scott let Kourtney take the wheel as he inspected the exterior of the vehicle.It would not have been surprising if Scott was in hot water following his wild weekend in Vegas while Kourtney stayed in Miami to look after their two children.

The reality star threw fistfuls of dollar bills into the crowd as he partied in Las Vegas on Saturday night.In scenes which surely would have made girlfriend Kourtney cringe, the father of her two children swigged from a beer as he made an ostentatious show of his wealth.There were limits to his generosity however, with Scott only throwing $1 bills.The 29-year-old was hosting his wild American Psycho-themed Halloween party in Las Vegas Saturday night.And with his retro haircut and 1980’s Wall Street attire, Scott looked the spitting image of Christian Bale as Patrick Bateman in the cult favourite black comedy from 2000.

In Bret Easton Ellis’s dark and violent satire, Patrick is a shallow yuppie living in Manhattan who’s obsessed with success, fashion, and style.He is also a serial killer who murders, rapes, and mutilates both strangers and acquaintances with little provocation or reason.Looking a bit tipsy, the Keeping Up with the Kardashians hunk lavished getting into his homicidal character, wielding an axe and at one point literally tearing at a dollar bill with his teeth.

Disick was sharply dressed in a white dress shirt, black trousers, lavender necktie, and yellow suspenders while partying in the VIP section of 1-OAK club at the Mirage Hotel & Casino.The father-of-two, juggling his axe, cigarette, and beer, finished his cinematic look off with Rayban sunglasses and a portable cassette player.It appeared to be a mostly guy’s night out as Scott was only photographed with his similarly dressed bros, close friend Scott Sorrentino, and the club’s owner.

At around 2 am, Scott capped off the evening by pretending to chop at his shirtless muscular friend with a huge grin on his face.Earlier this month, the reality personality hosted a 16th anniversary party at Mohegan Sun Casino where he was observed by a Hollywood Life source as ‘being rude to his waitress with his arm around a hot blonde.’And last month, Scott was spotted drinking Heineken beers at Tryst in Toronto before reportedly having women back to his hotel room for a party until 4:30 a.m.Meanwhile, his partner of five years Kourtney was in Miami watching over the couple’s young children – two-year-old Mason and three-month-old Penelope.

The busy mother appeared to stay in for the night – tweeting about watching the 2008 film The Women, and listening to songs by her sister Kim’s rapper boyfriend Kanye West, The Beatles, and Britney Spears.Earlier on Saturday, Kourtney posted a picture of herself wearing false lashes and a pink top after a photo shoot.The 33-year-old is currently filming the third season of Kourtney & Kim Take Miami, which airs on E! next January.

Last Thursday, Scott fueled marriage rumours when he was seen shopping for an engagement bands alongside a male friend at Levinson Jewelers in Fort Lauderdale.An onlooker told RadarOnline: ‘Scott was most definitely shopping for engagement rings, and all of them were large!’Scott and his friend looked at a whole selection of amazing rings, all diamond, all different cuts, sizes, settings — he certainly is taking his time and wants to make the right purchase.’ – Dailymail