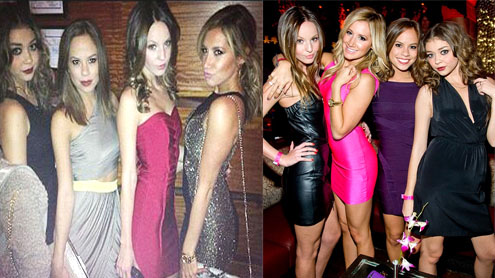 Sometimes you just need a weekend with the girls.Ashley Tisdale enjoyed a road trip to Las Vegas with her BFFs and fellow starlets Sarah Hyland, Samantha Raye Droke, and Kim Hidalgo this weekend.

On Friday night, the stunning foursome slipped into skin-tight mini-dresses and hit TAO in the Venetian Hotel & Casino to celebrate Samantha’s 25th birthday.The pretty ladies dined on satay bass, orange chicken, sushi, and a delectable dessert sampler plate at the Asian bistro before hitting the adjoining nightclub to dance to the beats of DJ Jessica Who.

The 27-year-old blonde flaunted her tanned and toned pins in a blindingly Barbie-pink mini-dress, while the 21-year-old Modern Family actress took the plunge in a flirty LBD.According to Las Vegas Informer, Breaking Bad star Aaron Paul and his fiancé Lauren Parsekian, Olympic Gold Medal swimmer Cullen Jones, and Friday Night Lights actress Aimee Teegarden were also at TAO Friday.Ashley, Sarah, and Kim continued to celebrate ’round two’ of Samantha’s birthday on Saturday night where they each took turns giddily posing for pictures with funnyman Ken Jeong.

‘Ultimate Vegas experience. Hanging with Ken Jeong #TheHangover,’ Ashley tweeted to her 8.2 million followers.The 43-year-old, who’s married and has twin daughters, has been busy reprising his role as Leslie Chow in The Hangover Part III.The entire Wolfpack have been been frequently spotted on the Las Vegas Strip, at Caesars Palace, and Nogales, Arizona – which doubled as Tijuana – since filming began in early September.

Meanwhile, the four actresses had no trouble finding more flattering mini-dresses for their second night of festivities – with Ashley in a sparkly black-and-gold number and Sarah back in black.The High School Musical starlet and her three friends later swapped their sexy dresses for comfy animal-print pajamas to continue their girly sleepover fun back at their hotel room.

The Sons of Anarchy actress will next be seen in Scary Movie 5, which will parody the 2011 film The Black Swan.Ashley stars as Jody, a ballet dancer, in the fifth installment of the horror parody film series which comes out next April.Lindsay Lohan, Charlie Sheen, Molly Shannon, Heather Locklear, Simon Rex, and Mike Tyson will also appear in the comedy.She’ll lend her voice for the animated spin-off series, Sabrina: Secrets of a Teenage Witch, as well as the film version Phineas and Ferb.Not seen this weekend was Ashley’s 30-year-old boyfriend Scott Speer, who directed her in the 3D dance film Step Up Revolution.