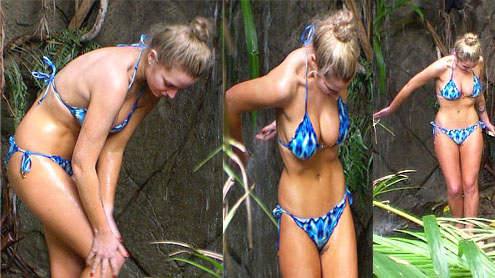 Ever since it was revealed that Helen Flanagan would be heading into the jungle, it was expected that she would show off her bikini body and that’s exactly what she’s been doing.

The 22-year-old actress displayed her feminine figure in a revealing two-piece during her first day on I’m A Celebrity… Get Me Out Of Here.The star’s sexy shower antics came as she struggled with life in camp and admitted to being lazy.Helen was the final celebrity to emerge from her sleeping bag on the first morning in camp, and felt forced to do her bit as she watched the rest of the group busy themselves.However, she didn’t exactly make herself useful and failed to find a job to do, looking shocked when she discovered that one of the daily chores was to clean out the dunny.

‘We have to clean the dunny every day and you will have to do it,’ Linda Robson told the former soap star.’No one is allowed to do a number two while they are here,’ Helen then declared upon hearing this. She then confided in Brian Conley, saying: ‘How come everyone is so much better at doing stuff than me?’ before confessing to Linda and East Enders star Charlie Brooks: ‘I don’t think I’m going to be very popular because I’m squeamish.’ ‘You might be popular to do the trials,’ Linda predicted, meaning that the public will no doubt pick on her now.Helen continued the conversation by admitting that she thinks she will annoy her fellow campmates by not pulling her weight, but this didn’t impress Linda, who muttered: ‘You will cause I’ll make you do it!’

But instead of doing something that would benefit everyone, Helen decided to pamper herself and declared: ‘I’m going to go and give myself a spray tan and do something constructive.’The idea of having a glowing tan was clearly enough to make Helen forget all about her first night’s sleep in the jungle. – Dailymail