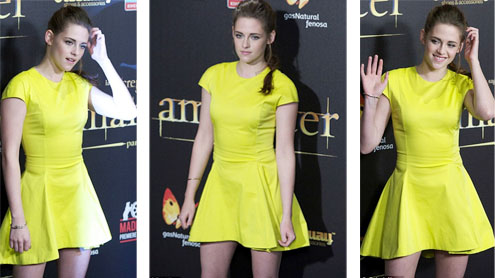 Kristen Stewart dazzled in a brightly coloured yellow dress at the The Twilight Saga: Breaking Dawn Part 2 in Madrid, Spain on Thursday night.

The actress, 22, showed off her bold new look on the red carpet, and even threw in a few smouldering pouts as she posed for photographers.Kristen wore a Dior dress for the event, just a day after she wowed her British fans by wearing a sequin and lace jumpsuit at the London premiere.She was joined by her co-star and her real life boyfriend Robert Pattinson.One of the film series’ other big stars, Taylor Lautner was also at the event.Both of the men looked handsome as they posed for the snappers.

Taylor wore a white T shirt underneath his suit, while Robert looked like a dapper gentleman in his outfit.However, Kristen seemed happy to be close to her boyfriend, holding him tightly as they walked up the red carpet.Before they took to the red carpet, Robert, Kristen and Taylor were spotted on a Spanish light entertainment show, which saw Robert and Kristen blindfolded at one point. Breaking Dawn Part 2 is the final film in the hugely successful vampire series and it will be the last time fans will see Robert Pattinson and Kristen Stewart playing Edward Cullen and Bella Swan.The film is expected to be a massive box office hit, but has received a lukewarm response from a number of film critics. – Dailymail