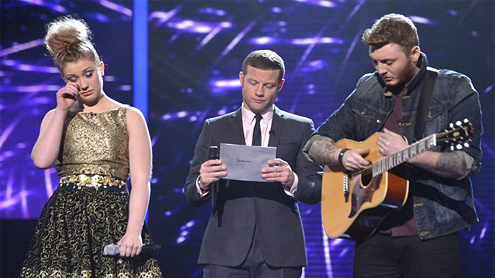 Ella Henderson was voted off in a shock X Factor twist on Sunday night after going head-to-head with James Arthur.

The appearance of arguably two of the most talented contestants in the bottom two horrified viewers and the judges alike.All four judges were furious with who had ended up in the bottom two, and couldn’t chose between the talented stars so it was brought to deadlock.Unfortunately for Ella, James had more public votes so he was saved for another week.

Accepting her fate graciously, the 16-year-old said: ‘This year , the talent on the show is incredible. Everyone deserves to be on this show. I wouldn’t be where I am now without this show.James and Ella’s respective mentors Nicole Scherzinger and Tulisa both opted to save their acts, with Louis Walsh saving Ella and Gary Barlow opting for James.Tulisa hit out at the public for not voting for the two acts: ‘This is exactly when people are voting for the wrong people. These people should be finalists.

‘This is ridiculous. My decision is James, even though I love him to death. I shouldn’t have to make this decision tonight.’Nicole said: ‘No matter what happens, tonight is a great tragedy for this show. You two are the most talented to grace this stage. Ella I have no worries about you, but I have to stick with my boy.’Louis added: ‘I’m in shock. I thought they were two finalists. Nicole and Tulisa are broken-hearted.Ella you have so much potential. You’ve got so much more to give in this competition. James you are amazing. You’re a ready made act for a record deal. The act I’m sending home is James.’

Finally Gary brought it to deadlock when he saved James: ‘Finally its serious. People at home, we are voting for the best singers every week. I always knew it was going to come to this. It’s about the vocals, it’s a singing competition. The act I’m sending home is Ella.’After the result of the public vote was announced, Tulisa joined Ella on-stage.Tulisa said: ‘It’s ridiculous, this situation, it’s ridiculous, it’s ridiculous. People thought she was safe.There was nothing wrong about her performance. This week was one of the best she’s ever done.’

For the sing-off, the 16-year-old sang Daniel Bedingfield’s If You’re Not The One, while James, 24, performed an acoustic rendition of Alicia Keys’ debut single Fallin’ on his guitar.Hearing James and Ella were in the bottom two prompted a wave of shock on Twitter, with celebrity fans of the show expressing their horror at the result.The Saturdays’ Vanessa White tweeted: ‘The public u are out of order for doing this right now lol this is soooo sooo LIBS!!… Christopher are u MAD?! Hahahahhahahahahaha.’Leona Lewis tweeted: ‘No way should Ella and James be singing against each other!’

Strictly Come Dancing contestant Denise Van Outen wrote: ‘X Factor has become a joke.’Introducing her act on the sing-off, Tulisa said: ‘This act does not deserve to be in the bottom two tonight. It’s my little star.’Meanwhile, Nicole stopped short of turning the air blue as she said: ‘One of the greatest artists and talents to grace the stage. This is James effing Arthur.’Ella’s exit comes after Saturday night’s Guilty Pleasures theme, which saw perform You’re The One That I Want from Grease.Boy band Union J were the first to find out they were safe until next week after being in the sing-off the previous week.

Rylan Clark jumped up and down with joy when he found out he was progressing.Jahmene Douglas gave a calmer response when he found out he was through.There were boos when Christopher Maloney was the last to find out he was through to the next week, leaving the judges shocked to find Ella and James in the bottom two.The show kicked off with the X Factor’s six acts performing judge Tulisa’s song Young.There were also performances from X Factor alumni Olly Murs and R&B superstar Alicia Keys with her new single Girl On Fire. – Dailymail