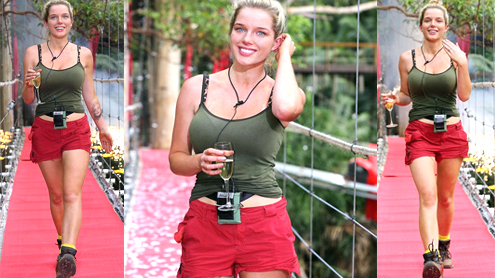 She paraded her curves around camp and broke a record by attempting five Bushtucker trials and failing to win a single meal but Helen Flanagan’s stint in the jungle has come to an end.

The 22-year-old actress left the jungle on Monday night after being voted out by the public.Speaking to Ant and Dec Helen said it was ‘crazy’ to be finally out.After apologising for just waking up, the former Coronation Street star said she would miss camp because she’s become so close to everyone else.She also asked if she could have a pillow because she was going to ‘cringe’ when looking back at her best bits.

When the presenters spoke to Helen about her tough time in the camp she admitted she had underestimated just how tough it would be.She explained that her fear of heights, which was tested upon arrival with a bridge task, left her lacking confidence.Helen did say that she was proud of herself for managing to get some stars during her stint in the jungle.

When Ant and Dec told her she had set a new record after failing to get any stars after being nominated for five trials, Helen exclaimed: ‘This is so humiliating.’Helen backed David Haye saying she would ‘love’ to see him win the show.Ant told her: ‘You’ve frustrated us, but we’ve loved you’.Helen made her way across the exit bridge with a glass of champagne in hand to be greeted by her mother Julia.The reunion proved a little bit too much for Helen who seemed a little overcome by it all.