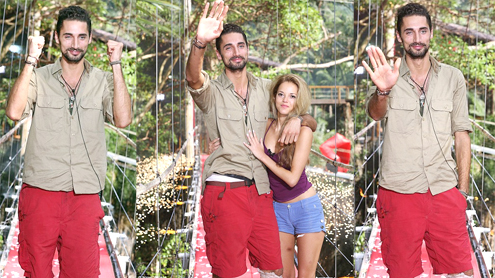 Made In Chelsea’s Hugo Taylor has become the latest star to be evicted from the I’m A Celebrity… Get Me Out Of Here! jungle.

But he was treated to a rather pleasant welcome to ease his pain at missing out on the final.The reality TV star admitted he had wanted to stay in the camp after hearing his name called out by Ant and Dec – but he’ll find solace in the fact he’s now back in the arms of his girlfriend Natalie Joel.The Made In Chelsea co-star was there waiting for him at the end of the bridge as he made his way over following his evictee interview.

And to make up for lost time after three weeks stuck in the jungle, the pair embraced for a long passionate kiss in full view of all the waiting cameras.Hugo had been placed in the bottom two along with boxer David Haye as they awaited the name of the latest celebrity to leave the show.He looked upset as he waved goodbye to the remaining four – Eric Bristow, Ashley Roberts, Charlie Brooks and David Haye.

And despite obviously hating life in the jungle when he first arrived, Taylor admitted to Ant and Dec afterwards that he had actually wanted to stay until the end.He told them: ‘It’s so weird, I’ve been on the fence wanting to go and stay… Now I’m out I want to stay.’But he added: ‘I’m really proud of myself, it’s been three weeks today. It was fantastic – you don’t know how you’re going to handle these different things.’

And Hugo admitted that he had gone out on a high as he had enjoyed being in the camp with the four that were remaining, describing them as the ‘nicest people in the world’.He also spoke out about one particular unlikely friendship he had made in the jungle – with former professional darts player Eric Bristow.Hugo commented after watching a VT of their highlights together: ‘I love Eric. He’s just the coolest guy ever, nothing phases him.’ – Dailymail