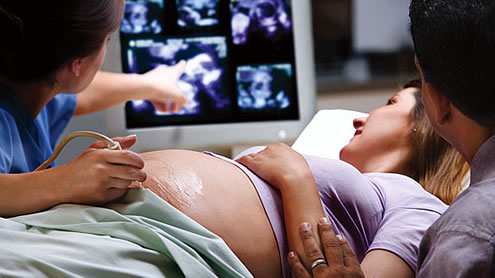 ISLAMABAD: Ultrasound scans relying on sound waves are safer than CT scans or X-rays which use radiation to confirm or rule out surgery to remove the appendix, according to an American study.

The appendix is a finger-shaped pouch that extends from the large intestine. Infection or blockage of the appendix causes appendicitis, which can lead to abdominal pain, vomiting and fever. Children suspected of appendicitis are more likely to undergo CT scans if they are evaluated at a general hospital, a new study by Washington University School of Medicine, St. Louis has revealed, the journal Paediatrics reports.

Use of either technique can potentially reduce the occurrence of unnecessary surgeries and speed up the diagnosis of appendicitis, according to a Washington statement. But recent reports have suggested that CT scans can magnify children`s lifetime cancer risk, because of radiation. Therefore, researchers are reassessing the role of such scans and seeking ways to reduce their use, according to a varity statement.

“Appendicitis is a very tough diagnosis, because its symptoms overlap with viral infections and other problems,” says study co-author Jacqueline Saito, assistant professor of surgery. “We don`t want to operate when the appendix is fine, but if we wait too long, an inflamed appendix can rupture or perforate, making recovery more complicated and much slower,” added Saito. Saito and her colleagues analysed case records of 423 children who had appendectomies or surgery to remove the appendix, at St. Louis Children`s Hospital.

“Ultrasound scans are difficult to perform correctly in this context and what specialists can do at children`s hospital may not be realistic or even available in a general hospital, which doesn`t care for children as often,” Saito says. – Onlinenews

Kerry Katona's nipple slips out of her top ON STAGE