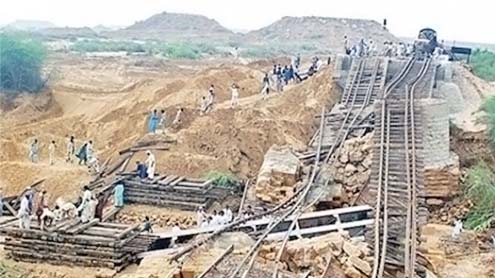 ISLAMABAD: The modern road and rail link between Pakistan and China will not only boost trade and industrial activity in the region but also promote tourism in the country, especially in Gilgit-Baltistan, Khyber Pakhtunkhwa and coastal areas of Makran.

The two countries have recently agreed to establish an economic corridor between Kashgar, China, and Gwadar, Pakistan. The $ 18 billion joint venture will include road and rail links passing through the mighty Karakorum and Himalayas in the Northern Pakistan.Elaborating the importance of this link for boosting fragile tourism industry in the country, President Sustainable Tourism Foundation Aftab Rana told APP that the road and rail route would pass through the most spectacular mountain ranges, which housed renowned high mountain peaks, glaciers and beautiful valleys.

He said the improved accessibility through the modern road and rail network would attract a large number of tourists from across the globe, especially from China, which already had a number one position in the outbound tourism market in the world with over 70 million Chinese travelling abroad each year.Similarly the railway link between Kashgar and Gwadar passing through the mighty Karakuram will definitely attract millions of tourists, foreign as well as domestic, he added.  He ephasasized that while planning this rail link, the government should pay special attention to developing areas along the route with the tourism point of view.

“With the development of tourism industry due to the rail link, other businesses such as hotels, restaurants, transport, handicrafts, shopping malls, local recreational resorts and local entrepreneurs will also get boost with thousands of new jobs and income generating opportunities for common people,” he said.He suggested that the tourist destinations in Gilgit-Baltistan should be specially focused in the near future.This railway network will not only play a key role in the economic uplift of the country but will also open doors of  prosperity for the people of remote mountainous areas, he added. – TheNation

Pope declares a day of fasting for Syria peace