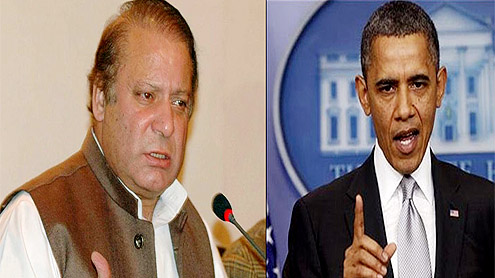 Prime Minister Nawaz Sharif flew into Washington Sunday to a red-carpet welcome for a four-day visit, during which he will hold talks with President Barack Obama on cementing wide-ranging relationship with a thrust on trade and investment cooperation.

The prime minister was greeted at the Joint Base Andrews by U.S. Acting Chief of the Protocol, U.S. Ambassador to Pakistan, Richard Olson, U.S. Civilian Aid Coordinator Ambassador Robin Raphel, Director Pakistan Affairs at the State Department Jonathan Ward. Foreign Secretary Jalil Abbas Jilani, who has been picked to be next Pakistan ambassador to the U.S. was also present to receive the prime minister. A joint color band, drawn from US Air Force, Navy, Army Marine Corps and Coastguards presented honor guard to the prime minister at the airbase, just outside Washington D.C. as  Pakistani and American flags fluttered in the breeze at the Andrews Air Force base.Sharif’s White House  meeting on Wednesday – that will tackle a range of political  and security issues – will be preceded by a series of meetings with top American administration. The schedule also includes a meeting with Vice President Joseph Biden, a longtime proponent of close ties with Pakistan.

On Sunday, U.S. Secretary of State John Kerry will meet with Prime Minister Sharif to discuss bilateral relations, which in the recent past had been overshadowed by Afghan war security-driven issues like cross-border militancy and hit a low point with a spate of unsavory events in 2011. But since then the two sides have gradually improved their relationship and on a recent trip to Islamabad, Kerry announced that Washington and Islamabad would soon resume their strategic dialogue, which covers cooperation in a broad range of security, economic and social uplift areas. Secretary Energy Earnest Moniz, US Trade Representative Michael Froman and Secretary Treasury Jacob Lew will call on the Pakistani Prime Minister, reflecting the Sharif government’s priorities to seek cooperation in energy and trade areas.

Besides, Sharif will reach out to American entrepreneur in a meeting with US-Pakistan Business Council with a message of facilitation for foreign investment in the energy and other potential sectors. He will also address US Institute of Peace and spell  out his government’s policy on dealing with challenges facing the country.An address to the Pakistani-American community is also scheduled, during which the prime minister will speak about his country’s efforts to address energy shortages and materialize development. In his meeting with President Obama, the prime minister will stress an end to drone strikes the U.S. carries out unilaterally in pursuit of militants in Pakistani tribal areas. The drone operations are deeply unpopular across the Pakistani nation for the civilian losses they cause and are seen as violation of national sovereignty. – App

US to use Romanian Air Base for Afghan Pullout