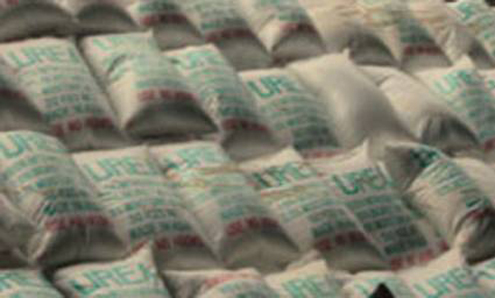 KARACHI: The total urea offtake for January 2014 has reached the level of 565,000 tonnes as against 517,000 tonnes in the same period last year, depicting an increase of 9.0 percent.
Invest Cap’s analyst attributed this increase in total urea offtake mainly to favourable agricultural environment and pre-buying of urea by farmers in expectation of urea price hike due to gas price increase.

Furthermore, sales of locally manufactured urea are likely to be around 357,000 tonnes that is stagnant as compared to the same period last year, said the analyst.

However, in comparison with December 2013, sales are down 16 percent. At the end of January 2014, inventory is likely to be around 265,000 tonnes, of which nearly 94 percent or approximately 250,000 tonnes rest with the government‘s National Fertilizer Marketing Limited (NFML).

AKD Securities’ analyst believed that strong demand and higher gas availability to Engro Fertilizer led the growth. While urea offtake alone in December 2013 surged to 674,000 tonnes, up by 22 percent on monthly basis as against 551,000 tonnes in November 2013, NFML dominated market share.

However, with the winding up of NFML and gas supply expected to continue to Engro Enven through first half of 2014, import requirements should remain minimal going forward, said the analyst.
DAP offtake in 2013 stood at a four-year high of 1.62 million tonnes led by record production by FFBL and a 25 percent yearly increase in imports.
DAP production of FFBL stood at a record 745,000 tonnes in 2013 with the 115 percent capacity utilisation while total industry DAP offtake led by 11 percent yearly higher average DAP primary margins during the year despite a 17 percent yearly decline in international urea price, DAP imports also increased by 25 percent on yearly basis to 754,000 tonnes.

With the recent decision by the government to wind up operations of NFML, the threat from subsidised imported urea during the remaining Rabi season has been neutralised. While NFML’s December 2013 closing inventory of a substantial 280,000 tonnes should be liquidated in January 2014, the analyst sees urea import requirement of a nominal 80,000 tonnes to 90,000 tonnes each month going forward.

Meanwhile, sharp decline in international DAP prices also induced farmers into buying DAP in late 2013. International DAP prices touched $350 per tonne in November 2013 and resulted in 9.0 percent reduction in domestic DAP prices over fourth quarter 2013, which was down by12 percent on yearly basis. Obviously, there are other factor input costs that have a say in the farmer’s nutrient use decision but fertilizer input costs play a major role where we estimate nutrient cost at 25 percent of the total cost of crop production and 40 percent of variable cost of production, said Invest Cap’s analyst.

In 2013, domestic urea production stood at 4.8 million tonnes, up 16 percent on yearly basis primarily attributable to enhanced production from Engro at 1.6 million, up 66 percent, where operating the more efficient Enven plant on Mari, and additional gas diverted from Guddu resulted in both of Engro’s plants being operational for part of the year.

Meanwhile, analyst anticipates that revalidation of the Gas Sale Agreement (GSA) pertaining to Kunnar Pasaki Deep (KPD) and start of gas flow from there will narrow down this gap to minimal from 2015 onwards.

Moreover, the government has recently decided in principle to wind-up NFML and distribute imported urea through local producers in accordance with their share in total production. This along with price matching of imported and locally produced urea is likely to provide limited downside to current urea prices as Engro may not reduce prices further post allocation of concessionary gas and lower incentive for dealers to opt for cheaper imports hence.

For 2014, the analyst believes local producers look all set to sell whatever they produce with limited volume competition from imports. While the government has of late decided to equalise the prices of domestically produced and imported urea, note that due to a recent run-up in international urea price (currently $400 per tonne FOB and up by a sharp 45 percent versus the low of $280 per tonne in September 2013). Government subsidy on imported urea should expand to Rs 1,000 per 50kg bag on fresh imports. This in our view creates a better opportunity for local producers to pass gradually through incremental gas cost impact to farmers. Key risk, in our view, is a sharp reversal in the trend of international urea prices, the analyst added.

As per NFDC, urea offtake for December 2013 has clocked in at 674,000 tonnes – down 29 percent on yearly basis due to higher base of last year. In December 2012, price incentive provided by local urea producers to match the price of the imported (subsidised) urea, and the announcement of 14 percent higher wheat support price, induced buying towards the end of year.

In December 2013 urea offtake has meanwhile remained on the higher side as compared to 2013 monthly average of 491,000 tonnes. Overall, in 2013, urea offtake clocked in at 5.9 million tones, up 13 percent on yearly basis.

As far as DAP offtake is concerned, the same clocked in 36 percent higher at 173,000 tonnes in December 2013 which lifted overall 2013 DAP offtake to 1.6 million, up 37 percent on yearly basis. The demand for fertilizer in last two months of 2013 increased significantly owing to pre-buying by farmers and dealers in anticipation of urea price increase due to predicted gas price hikes.